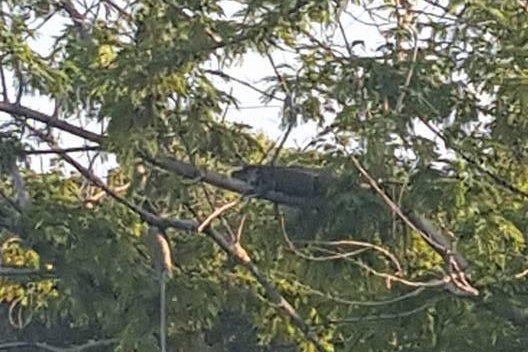 An apparent alligator lounges in a Florida tree. Screenshot: WINK-TV

CAPE CORAL, Fla., July 7 (UPI) -- A Florida man captured a photo he believes to depict an alligator on a tree branch -- and experts agree with his assessment.

Ronald Saracino of Cape Coral said he spotted what he initially believed to be a lizard in a tree near Viscaya Parkway and 9th Lane.

"Saw something in a tree, at first I thought maybe it was a lizard," Saracino told WINK-TV. "The more I looked at it, the more I thought it was actually probably a 5-foot gator."

"I know people are not going to believe it, but I 100 percent believe it was a gator!" he said.

Amy Sera of the Calusa Nature Center in Fort Myers said alligators are better climbers than many people might think.

"They are more agile than people give them credit for," she said.

"I've seen picture of crocodiles doing that behavior. It gives them a little bit better view of their territory," Sera said. "Cold blooded animals get their energy from the sun and the warmth. So, they are more active in the summer."

An agile alligator's climbing skills were on full display in late June when Eric Gilbert captured video of an approximately 8-foot alligator quickly scaling a chain-link fence with barbed wire at the top at the Hideaway County Club in Fort Myers.

Saracino said the fence-climbing gator video has him convinced the animal in the tree was an alligator.

"A little kid can climb up this tree like it's nothing," Saracino told WTVT-TV/DT. "It doesn't look like it's hard at all."

Florida Fish and Wildlife officials agreed the photo appears to depict an alligator due to the position of the reptile's body and the size of its body in relation to its head.

Odd News // 3 days ago
Florida golfer calmly takes shot while alligator approaches
July 1 (UPI) -- An alligator was caught on camera approaching a group of golfers on a Florida course while a member of the party nonchalantly took his shot.

Odd News // 3 days ago
Underground eel pit turns Kentucky man into TikTok star
July 1 (UPI) -- An animal-loving Kentucky man is becoming famous on TikTok after converting the basement of his house into an eel pit.

Odd News // 3 days ago
Bear cub rescued from plastic jar in North Carolina
July 1 (UPI) -- A wildlife biologist in North Carolina came to the rescue of a bear cub seen wandering in Asheville with a plastic food container stuck over its head.

Odd News // 3 days ago
International Joke Day has brought mid-year laughs since 1994
July 1 (UPI) -- International Joke Day, celebrated annually on July 1, was started in 1994 by an author and graphic artist who wanted to bring some levity to the halfway point of the year.

Odd News // 4 days ago
Abandoned Burger King found behind wall at Delaware mall
June 30 (UPI) -- Officials at a Delaware mall said they were "blown away" when a wall at the shopping center turned out to be hiding something unexpected -- a completely intact Burger King restaurant with vintage decor.
Advertisement