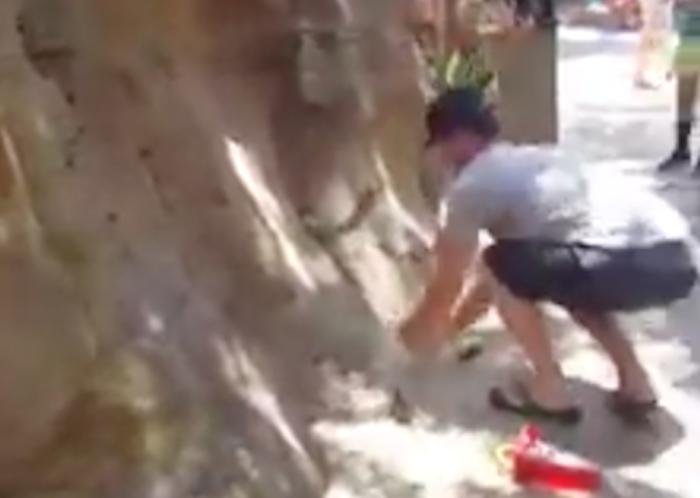 A group of ducklings were rescued from a 30-foot tall rock barricade at Flordia's Busch Gardens theme park, as a man caught the baby ducks as they attempted to jump down for their mother. Channing Deren shared video of Eric Pelno as he attempted to catch the ducks and said they all made it safely to their mother, although one suffered a broken leg. Screen capture/Channing Deren/Facebook

TAMPA, Fla., June 21 (UPI) -- A man helped rescue a group of ducklings by catching them as they fell from their nest on top of a stone barricade at Busch Gardens in Tampa, Fla.

Channing Deren shared video of Eric Pelno as he attempted to catch the stranded ducklings as they attempted to jump down to their mother from the top of the barricade.

"There were 15-20 baby ducklings literally falling from a nest at least 30 ft high as we walked by," she wrote. "At first one hit my shoulder and we didn't know what was going on...then eric just went into beast mode and started catching ducklings from the sky!"

Pelno can be seen looking up at the ducks and attempting to break their fall by standing with his hands cupped.

"I was doing ok until they started jumping 2 at a time," Pelno commmented on the vidoe. "Those were some brave little ducks standing up there at least 30 feet in the air debating whether or not to jump down to their mom."

According to Deren, all of the ducks eventually made it back to their mother with Pelno's help, but one suffered a broken leg.

Odd News // 54 minutes ago
Runaway cat reunited with family after 14 years in Britain
Feb. 25 (UPI) -- A British family whose cat escaped through an open bathroom window have been reunited with their beloved pet 14 years later.