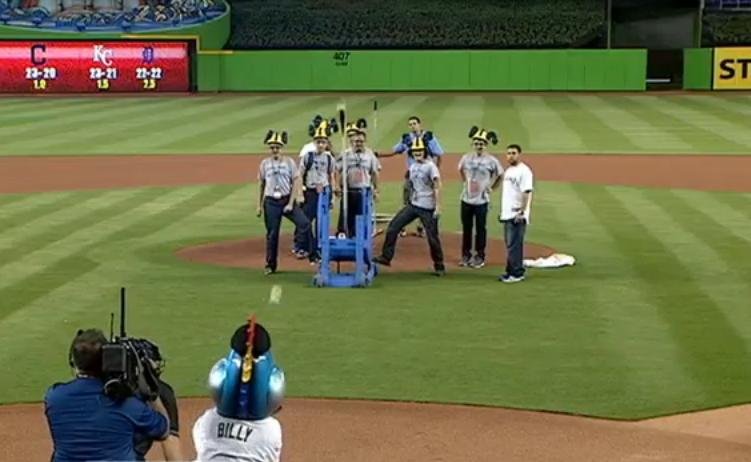 A team of students from Coral Park High School's Ram Tech engineering program launched the first pitch at a Miami Marlins baseball game from a catapult. The team won the right to launch the pitch when their catapult topped one built by a team from Ramblewood Middle School by pitching two strikes during S.T.E.A.M. Day at Marlins Park. Screen capture/MLB/Fox Sports

MIAMI, May 25 (UPI) -- A group of Florida high school students won the opportunity to use a catapult they built to launch the first pitch at a Major League Baseball game.

Students from Coral Park Ram Tech engineering team were able to launch a strike at Miami Marlins mascot, Billy the Marlin, before the team's game against the Tampa Bay Rays on Tuesday.

The pitch traveled across the plate at a high speed and managed to knock Billy down.

A day earlier the engineering team from Coral Park high school won the opportunity to launch the first pitch by participating in Science, Technology, Engineering, Art and Math or S.T.E.A.M. Day at Marlins Park.

The students from Coral Park High were victorious over a team from Ramblewood Middle School by pitching two strikes.

According to Fox Sports, the Ram Tech team experienced some difficulty in the competition as the catapult broke repeatedly.

Odd News // 54 minutes ago
Bear cubs peek into California home through back door
Oct. 19 (UPI) -- A California woman captured video when a pair of bear cubs wandered into her backyard pool area and walked up to her back door to peer into the house. 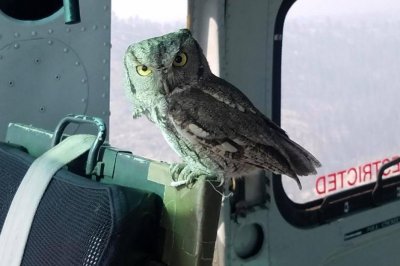