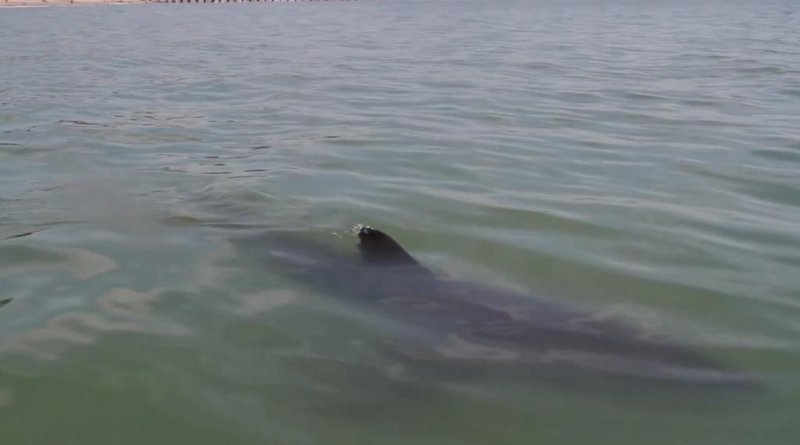 California photographer Giancarlo Thomae captured video of his close encounter with a juvenile great white shark while kayaking at Sea Cliff State Beach. Thomae remained relatively calm after the shark approached him before swimming underneath his kayak. Screen capture/Giancarlo Thomae/Storyful/AOL

APTOS, Calif., May 19 (UPI) -- A California man was undisturbed after spotting a large shark swimming underneath his boat while kayaking.

Photographer Giancarlo Thomae captured the video and managed to remain calm throughout his encounter with the shark, which he identifies as a juvenile great white shark.

The shark can be seen approaching Thomae's kayak from the left side as he took the boat out into the water at Sea Cliff State Beach.

He went on to calmly identify the shark, while the inflection of his voice raised slightly once the shark made its way underneath his kayak.

A Texas man had a similar encounter with a much smaller shark, which ended in him narrowly escaping a bite after pulling the shark into his kayak while fishing near Corpus Christi.

Odd News // 17 hours ago
Large lizard escapes from Ontario zoo
June 21 (UPI) -- An Ontario zoo is asking members of the public to be on the lookout after a large lizard slipped out of the facility through an open door.

Odd News // 18 hours ago
8-foot python captured in driveway of New York home
June 21 (UPI) -- Police responded to a Long Island, N.Y., home at which a more than 8-foot snake was found slithering in the driveway.

Odd News // 20 hours ago
Hard hat lost in Massachusetts washes up on Portuguese island
June 21 (UPI) -- A Massachusetts man whose hard hat fell into the Atlantic Ocean in 2014 received word that his lost hat washed up 2,000 miles away in Portugal.

Odd News // 21 hours ago
Wild boar takes a ride on two Hong Kong subway trains
June 21 (UPI) -- A wild boar caused a stir on the Hong Kong subway when it took a ride on a train -- and switched trains at a station to evade its pursuers before being captured.