The black bear is corralled in a tree near Hermosa/Highland. Dept. of Fish and Wildlife will attempt to relocate. pic.twitter.com/BBUmjA0g2h

RANCHO CUCAMONGA , Calif., May 18 (UPI) -- Police responded to calls about a loose bear roaming the streets of Rancho Cucamonga, Calif. on Wednesday morning.

Rancho Cucamonga police department tweeted video captured by an officer showing a black bear walking along a nearby sidewalk.

The presence of the bear prompted Vineyard Junior High School and Highland Avenue Christian School, located about a mile apart from each other, to enter a lockdown beginning at around 8:15 a.m.

Police later shared a photo of the bear in a tree reported that Department of Fish and Wildlife officers had reported to the scene in hopes of bringing it down safely.

"The black bear is corralled in a tree near Hermosa/Highland. Dept. of Fish and Wildlife will attempt to relocate," they wrote.

A RCPD deputy recorded this video while pursuing the black bear. Dep. of Fish n Wildlife are onscreen. pic.twitter.com/Yodi9JUydv

Odd News // 19 hours ago
Pizza with 254 kinds of cheese breaks Guinness record
Nov. 30 (UPI) -- A French chef captured a Guinness World Record by cooking up a pizza that contains 254 varieties of cheese.

Odd News // 20 hours ago
Dog reunited with family after 11 months on the loose in Chicago
Nov. 30 (UPI) -- A dog that ran away from her owner's home was reunited with the family after spending nearly a year on the streets of Chicago.

Odd News // 22 hours ago
Hawaii offers free round trips for remote workers
Nov. 30 (UPI) -- The State of Hawaii announced it is offering free round-trip tickets to Honolulu to people who work remotely and are willing to dedicate some of their time toward contributing to the community.

Odd News // 1 day ago
Unicyclist completes 450 juggling catches in 1 minute for new record
Nov. 30 (UPI) -- An Idaho man put his balancing skills to the test by breaking the Guinness World Record for fastest juggling while riding a unicycle. 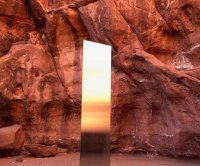