Indian woman gives birth at the estimated age of 72 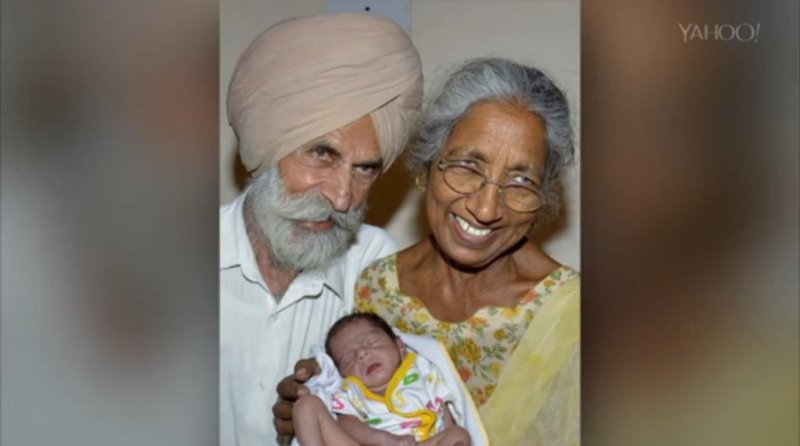 BENGALURU, India, May 12 (UPI) -- An Indian couple who are both in their 70s have had their first child after undergoing two years of fertility treatments.

Daljinder Kaur, who is believed to be about 72 but is lacking a birth certificate, gave birth to a healthy baby boy April 19 at Haryana's National Fertility Center, which is famed for offering fertility treatments to women well past menopause.

The baby was fathered by Kaur's husband of 46 years, Mohinder Singh Gill, 79.

"Every one asked me to adopt a baby but I never wanted to. Now I have my own child," Kaur told The Telegraph. "We will raise him and give him a proper education. I had faith in Almighty that I will have my own baby, and Waheguru [god] answered my prayers."

However, some doctors are criticizing the clinic, headed by Dr. Anurag Bishnoi, for giving in-vitro fertilization treatments to a woman of Kaur's advanced years.

"It perhaps makes a great headline, but we are living in the real world. Counselling is a must for couples who aspire for IVF. As a mother grows older, there are chances that she passes on comorbidity to the baby as well. We need to consider the welfare of the unborn child. A mother in her 70s can face cardiac and bone-related problems that can affect the baby," Dr. Manisha Singh told The Times of India.

India's medical council has been pushing for legislation banning fertility treatments for women over the age of 50 due to the health risks for older mothers and their babies.

"We condemn this totally. With science, you can make a 90-year-old person pregnant, what's the big deal? The question is not about technicalities, it's about ethics. Our responsibility to the patient. This man is an upstart, he doesn't represent us. He needs to be banned," Pai said.

Bishnoi said the decision to undergo fertility treatments should be left up to the patients.

"Reproduction is a fundamental right. The government cannot prevent that," he said. "They want to prevent women over 50, but on what basis can they do this to their own people? They are not killing anyone, they are giving birth."

The current record holder for oldest mother is Maria del Carmen Bousada Lara, who gave birth to twins in Barcelona at the age of 66 in 2006.

Odd News // 27 minutes ago
About 20 escaped ostriches run loose through Canadian town
Nov. 28 (UPI) -- Police in Alberta flocked to a town to round up about 20 ostriches that escaped from their owner's property.

Odd News // 4 days ago
Beatles cassette returned to Texas library was 44 years overdue
Nov. 23 (UPI) -- A library in Texas said employees recently found something unexpected in the drop box -- a Beatles cassette tape that had been checked out 44 years earlier.

Odd News // 4 days ago
Swedish zoo searching for escaped owl
Nov. 23 (UPI) -- A zoo in Sweden said officials are searching for a giant owl that escaped alongside another avian two days ago.

Odd News // 4 days ago
Dog rescued after falling through ice in New York
Nov. 23 (UPI) -- Animal control officers in New York came to the rescue of a dog that fell through the ice of a partially frozen pond and was struggling to swim.

Indoor cat reunited with owner after 18 months in the wild

'Neverbreak' trunk from 1930s washes up on Florida beach