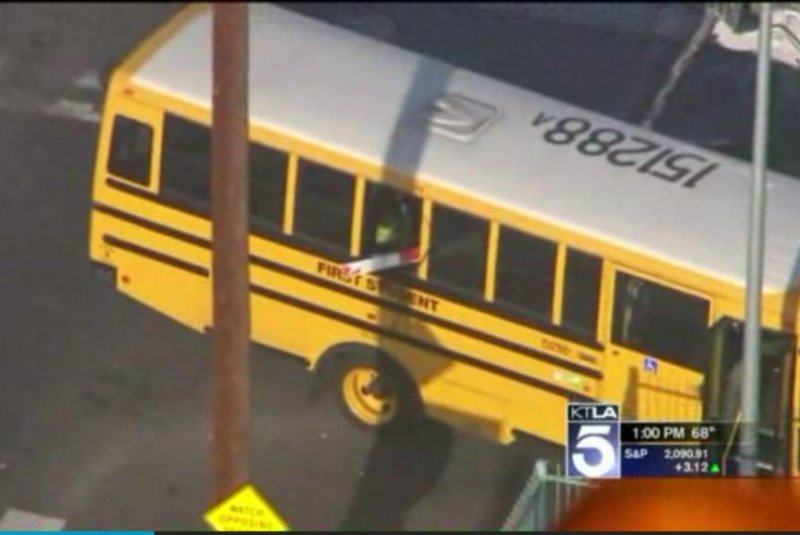 LOS ANGELES, April 27 (UPI) -- A Los Angeles school bus was completely impaled by a railroad crossing arm that broke windows on both sides of the vehicle and ended up in a child's lap.

The California Highway Patrol said the bus was crossing the tracks to make a left turn in the Central-Alameda neighborhood about 7:30 a.m. Tuesday when the crossing arm lowered and crashed through windows on both sides of the bus.

"At the intersection on the other side, there is a stop sign. So he stopped at the stop sign, proceeded across the tracks, and that's when the lights start to go off," CHP Officer Dion Conley told KABC-TV.

The CHP said there were eight special-needs students on the bus at the time of the incident. Officers said the children were not near the arm at the time of the crash, but footage from the scene shows one child sitting with the crossing arm on his lap.

A firefighter was seen freeing the smiling and apparently uninjured child from the seat.

Los Angeles Fire Department spokesman Erik Scott said firefighters used a rotary saw to cut through the crossing arm and remove it from the bus.

Scott said there were no injuries stemming from the incident, which Conley said is under investigation.

"We're going to investigate the way the arm is [situated], making sure it was operating properly, and the decision the driver made regarding the position of the arm when he was actually making his turn," Conley said.