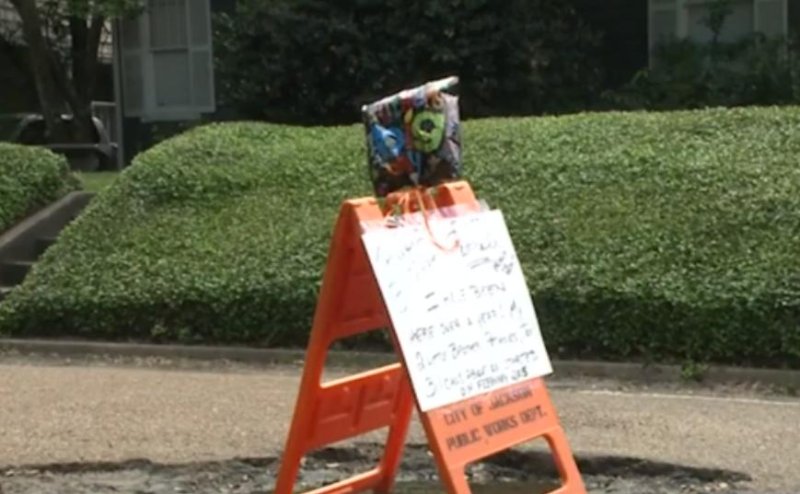 The city of Jackson, Miss. sent workers to fill a nearly 2-year-old pothole after residents held a "birthday celebration" for the road hazard. Devine St. resident Eddie Prosser placed a sign and balloons near the large pothole and its two "little brothers" after they had been in the neighborhood for 16 months. Within a few days city workers filled the potholes with dirt as residents hope they will soon be paved over. Screen capture/WAPT/Inform Inc.

JACKSON, Miss., April 26 (UPI) -- A group of residents in Mississippi caught the attention of their city's government by throwing a birthday party for a pothole.

Residents of Devine St. in Jackson placed balloons and a sign in front of the 16-month-old pothole and its two "younger brothers" in a mock celebration.

"I have been here over a year! My little brother potholes too!" The sign read. "311 calls about us started on February 2015!"

Eddie Prosser told WJTV that he was behind the sign and looked to use a bit of humor to the situation.

"I do find our problems in the city of Jackson serious but at the same time just one small pothole. When they fix the potholes just a block away it wouldn't of taken another 10 minutes," he said,

Prosser's stunt seemingly paid off as WAPT reported that shortly after the "birthday celebration" city crews came to fill the pothole with dirt.

The pothole has not yet been paved over, but resident Tracey Metcalf said she was hopeful the city would finish the job.

"Maybe they'll come back and pave it," she said. "If that's the case, we are happy."