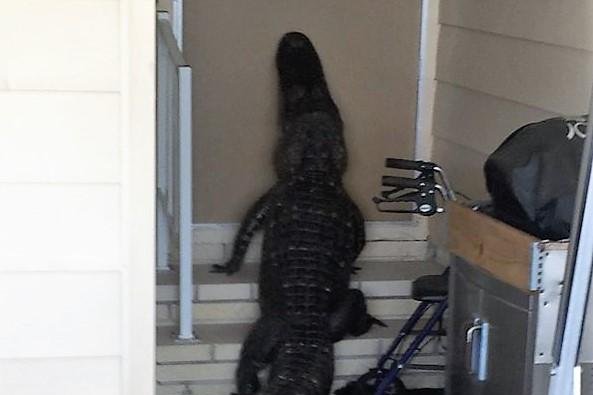 An unwelcome visitor at a Plant City, Fla., home likely has more on his mind than a quick chat about Jesus. Photo by the Hillsborough County Sheriff's Office/Twitter

PLANT CITY, Fla., April 4 (UPI) -- Authorities in Florida shared a photo of a resident's heart-stopping discovery -- a 9-foot alligator propping itself up against his front door.

The Hillsborough County Sheriff's Office said on Twitter Friday a Plant City man called 911 on March 27 to report the large gator was camped out on his front porch.

Sheriff's deputies arrived at the home with a licensed trapper and snapped a picture of the alligator climbing the porch stairs and propping itself up against the man's front door.

The alligator, initially estimated by the homeowner to be about 8 feet long, measured a more impressive 9 feet, 5 inches long.

Dep Krouse helps a licensed trapper with a 9'5" alligator attempting to gain access into a mobile home in Plant City pic.twitter.com/YfJVRd7QQ1

Odd News // 17 hours ago
Huge waterspout churns offshore as lightning flashes
At 6 a.m. CDT Tuesday, Boo Freeman filmed a massive waterspout off the coast of Destin, Fla., about 50 miles east of Pensacola, before most people had their first cup of coffee.

Odd News // 1 day ago
Squirrels are 'splooting' all over New York City
Squirrels in New York City parks have been spotted sprawled out on their stomachs with their arms and legs stretched out during very warm days, or splooting, as it's less commonly known.

Odd News // 1 day ago
Dog rescued after being lost in Missouri cave for up to 2 months
Aug. 15 (UPI) -- A team of spelunkers working to map a Missouri cave ended up rescuing a dog that may have been lost underground for up to two months.

Odd News // 1 day ago
Oregon couple's winning lottery ticket shredded by dogs
Aug. 15 (UPI) -- Oregon Lottery officials said they were able to reconstruct an $8 winning scratch-off ticket that was torn to shreds by the winner's dogs.