Dog in baby carrier dozes off at Philadelphia Phillies game

Two Philadelphia Phillies fans showed off their pet dog at a spring training game in Florida on Wednesday. The pup can be seen sleeping in a baby carrier, before the owner had the dog perform a little dance when he noticed they were on camera. Screen capture/MLB.com

Video shows the dog sleeping peacefully in a baby carrier on its owners chest as the Phillies took on the Houston Astros on Wednesday.

An announcer sarcastically commented that the apparently unenthusiastic pup was "very excited to be at this ballgame."

The dog's owner soon noticed he was on camera and made the dog "dance" for a bit before moving its paws in a clapping motion.

The camera briefly showed some more action from the game, before quickly returning to the dog in the stands as it took a small drink of water out of a bottle cap. 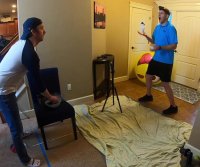 Odd News // 20 hours ago
Exotic eagle on the loose in Pittsburgh after aviary escape
Sept. 27 (UPI) -- Officials with the National Aviary in Pennsylvania said a Steller's sea eagle that escaped from its enclosure has been repeatedly spotted around Pittsburgh.

Odd News // 21 hours ago
World's longest charcuterie board assembled in New York
Sept. 27 (UPI) -- A group of New York food fans broke a Guinness World Record when they assembled meats and cheeses into a 315-foot-long charcuterie board.