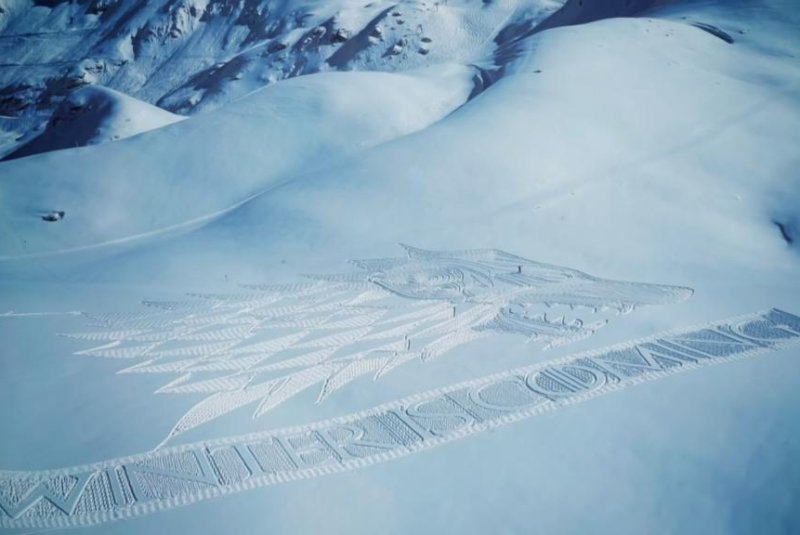 BOURG-SAINT-MAURICE, France, March 7 (UPI) -- An artist trekked up into the French Alps to spend 13 hours creating a giant tribute to the upcoming season of HBO's Game of Thrones.

Sky Atlantic, the station that airs Game of Thrones in Britain, sent artist Simon Beck into the French Alps' Les Arcs ski resort, where he walked over a distance of 20 miles for 13 hours to create the image of a direwolf, the sigil of the show's House Stark protagonists.

Beck said it took a total of 64,800 steps to create the direwolf and accompanying text, "Winter Is Coming."

HBO has been especially secretive about Game of Thrones' upcoming sixth season, refusing to mail out press copies for review prior to the April 24 premiere.

Odd News // 19 hours ago
Bear burglar breaks into Idaho man's car
July 6 (UPI) -- An Idaho man captured video of a clever bear that repeatedly opened the door of his parked car outside of his house.

Odd News // 22 hours ago
Woman wins $30,000 from lottery ticket she received as a gift
July 6 (UPI) -- A Maryland woman who received six scratch-off lottery tickets as a gift from a friend ended up winning a $30,000 prize from one of the games.

Odd News // 22 hours ago
Two moose relocated after wandering into city
July 6 (UPI) -- Police in Canada said two moose that wandered into the city of Saskatoon were captured and relocated to a more suitable area.

Curious bear uses face as a paintbrush at Washington zoo

Dog rescued after swimming 1.5 miles from shore in New Jersey