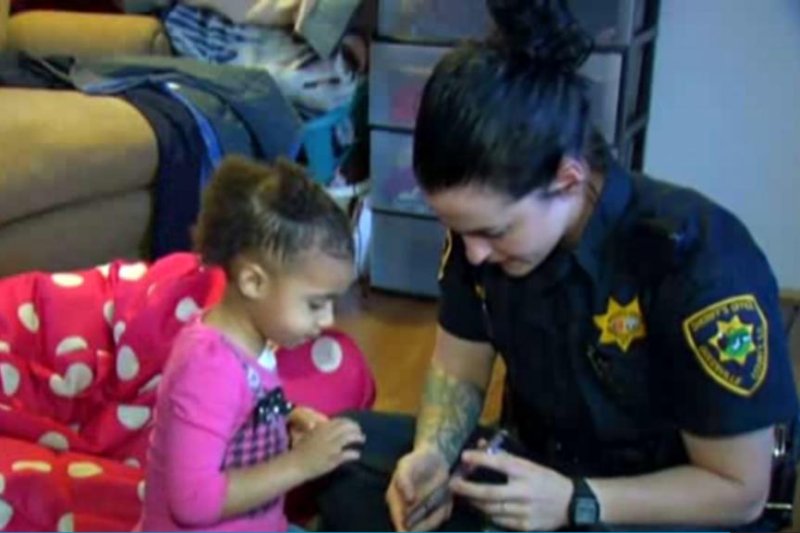 A South Carolina toddler called 911 to get some help putting on her pants. Screenshot: WHIO-TV

GREENVILLE, S.C., March 4 (UPI) -- A South Carolina sheriff's deputy responding to a 911 call from a toddler found the 2-year-old with a pressing emergency: pants trouble.

The Greenville County Sheriff's Office said Deputy Martha Lohnes was dispatched Wednesday to investigate a 911 call that sounded like a baby had accidentally dialed the emergency number and quickly hung up the phone.

"I show up and she comes to the door with her pants half on, saying she can't get them on. So I sit down on the stairs and help her put pants on. And then she proceeds to ask me to pick her up and hug her.....and that would be the best part of my shift today," Lohnes said in a post on the department's Facebook page.

Lohnes said she was impressed that the child, Aliyah, knew what to do in an emergency, even if she didn't yet understand what situations constitute an emergency.

"I thought it was awesome that at two years old, she knew to call 911 at all," Lohnes told WSPA-TV.

Pebbles Ryan, the girl's mother, said she was surprised to hear the story from Aliyah's caregiver.

"I came home to 'Oh, the police helped your daughter put pants on.' I was like 'OH! Ok?' Then she wouldn't let any of the police leave because she wanted hugs," Ryan said.

Ryan said she had talked to Aliyah about 911 prior to the incident.

"We've pointed out the numbers but it completely surprised me that she actually did it," Ryan said.

Odd News // 23 minutes ago
60-year-old braids of hair donated to Michigan charity
May 17 (UPI) -- A Michigan woman who received some braids of hair from her aunt when she was 12 years old donated the 60-year-old locks to a charity that makes wigs for children.