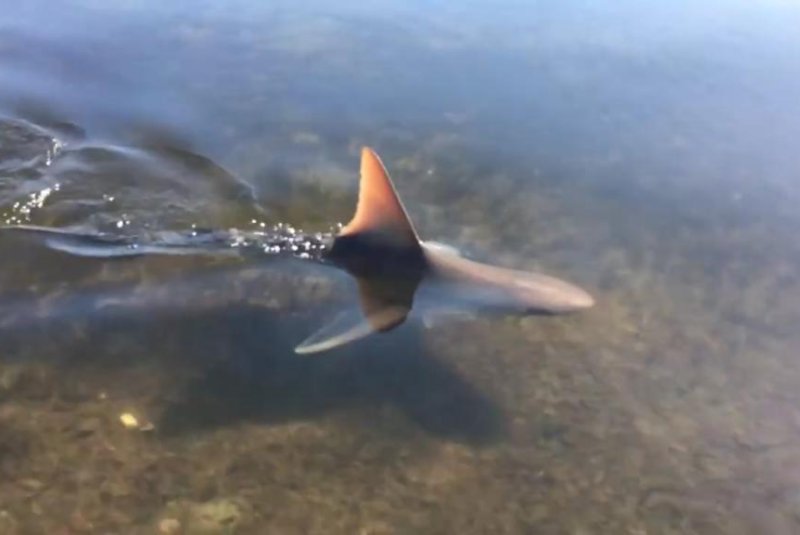 Robin Morritt, 61, was walking his dog Wednesday near the Royal Perth Yacht Club in Perth when he saw what initially appeared to be a large fish swimming just feet from the shore of the Swan River's Matilda Bay.

The fish came closer and he soon realized it was a 5-foot-long juvenile bull shark.

Morritt captured video of the shark and shared it with the yacht club, which posted the footage to Facebook.

"It was just fearless, it didn't worry about me, it just came straight at me and I just videoed it, it just came right past my legs," Morritt told Perth Now. "It was just quite spectacular to see it just cruising along the shore."

Morritt said he has frequently spotted dolphins in the area, but the bull shark was the first he had encountered in the bay.

"Thank you to Robin Morritt for sharing the footage of the Juvenile Bull Shark near the RPYC Marina this morning. Members are urged to take care and be alert in and around the water when at the Club," the yacht club said in its Facebook post.

Juvenile Bullshark sighted in the vicinity of RPYC Marina

Thank you to Robin Morritt for sharing the footage of the Juvenile Bull Shark near the RPYC Marina this morning. Members are urged to take care and be alert in and around the water when at the Club.

Odd News // 23 hours ago
Video captures scene as boulder crashes through house in Hawaii
Feb. 1 (UPI) -- Authorities in Honolulu are looking into a surreal incident in which a boulder smashed through the living room of new suburban home, narrowly missing the family who had only recently moved in.

Odd News // 1 day ago
South Carolina Powerball jackpot climbs to $653 million
Jan. 31 (UPI) -- South Carolina's Education Lottery Powerball draw failed to produce a jackpot winner overnight, but a lucky player did win $50,000 after buying a ticket at a convenience store in the historic city of Conway.

Odd News // 2 days ago
Red panda escapes from San Diego Zoo enclosure
Jan. 30 (UPI) -- A red panda surprised visitors at the San Diego Zoo when it climbed a tree and escaped its enclosure before zookeepers were able to lure it back hours later.

Odd News // 2 days ago
Zoos making cockroaches a Valentine's tradition
Jan. 30 (UPI) -- An obscure act of love, or pettiness, is becoming a popular tradition at zoos for Valentine's Day.