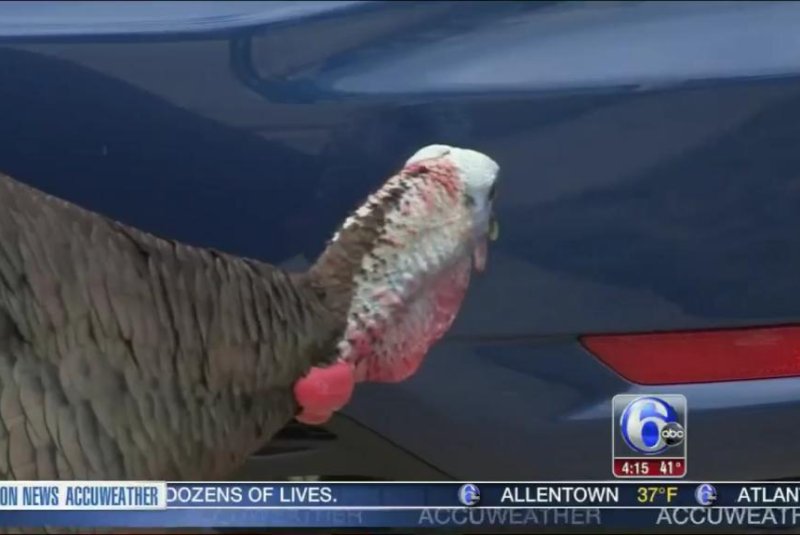 Patrick the turkey admires his reflection in a Honda Civic. Screenshot: WPVI-TV

MOUNT LAUREL, N.J., Feb. 29 (UPI) -- A New Jersey woman said a "love struck turkey" has taken a liking to her son's brand new Honda Civic and won't let anyone else near the vehicle.

Betty Ann DiGiacomo said she discovered a wild turkey wandering outside her Mount Laurel home about 7:30 a.m. Friday and she soon discovered the bird seemed enamored with her son's brand new Honda Civic, which he bought two months ago.

"I was laughing because it looked like he was looking over it to see if it was a good car, like he was shopping for a car," DiGiacomo told WPVI-TV. "I named him Patrick -- Patrick the love struck turkey."

Experts said the turkey is displaying what's known as "Crazy Jake Behavior," which is named for adolescent male turkeys, or Jakes.

The experts said turkeys in the mating mindset will often become attracted to shiny objects and will sometimes show an interest in their own reflections.

DiGiacomo said Patrick wouldn't let anyone else approach the car.

"When I banged the pots and pans he came towards me. And I'll be honest, I got a little scared and I ran in the house."

DiGiacomo tweeted Sunday that the turkey hadn't returned after wandering into the woods Friday afternoon.

"Patrick has gone back to his pack," she tweeted.

Odd News // 1 hour ago
Leopard captured after wandering into house in India
March 31 (UPI) -- Wildlife officials in India said a leopard wandered into a city and was captured about five hours after it was spotted inside a house.

Odd News // 4 hours ago
Snowmobilers rescue moose from tree well in Newfoundland
March 31 (UPI) -- A group of friends out snowmobiling in Newfoundland ended up rescuing a moose that fell into a tree well, and the incident was caught on video.

Odd News // 5 hours ago
Woman in-line skates backward in heels for Guinness record
March 31 (UPI) -- A Canadian circus performer was awarded a Guinness World Record when she strapped on a pair of high-heeled inline skates and skated 328 feet in 21.52 seconds -- while facing backward.

Odd News // 23 hours ago
Police responding to shut down comedy show find it was pre-recorded
March 30 (UPI) -- A British comedy club said about 20 police officers responded to the facility to shut down a live show that actually took place more than two weeks earlier. 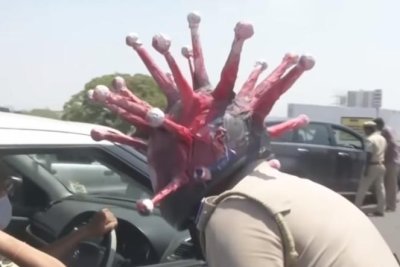