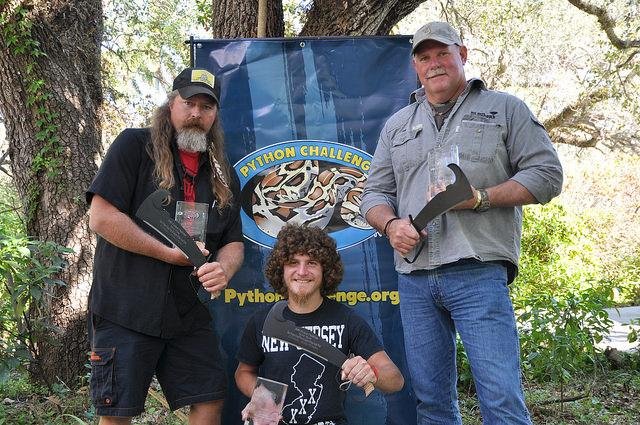 Participants captured 106 snakes in the monthlong competition designed to help thin out the thousands of invasive species in the Florida Everglades while also raising awareness for the state's environmental problems.

"Whether they're fishermen or they're hunters or they're hikers or they're birdwatchers — they're all looking for the python," Wildlife Commissioner Ron Bergeron told The Daytona Beach News-Journal.

People competed in both team and individual categories including "Most pythons" and "Longest Python." Winners were awarded cash prizes as well as a hand-crafted Woodman's Pal land-clearing tool donated by Pro Tool Industries.

A team lead by Bill Booth and partners Duane Clark, Dusty Crum and Craig Nicks captured the longest python, measuring 15 feet long, and won a grand prize of $3,000. Booth's team also won the $5,000 grand prize for capturing the most pythons with 33.

Daniel Moniz of New Jersey, who won awards for capturing the most pythons by himself (13) and the longest python caught by one person (13 foot, 8.7-inches), suffered bites to his arm, neck and face during the competition. He won a total of $4,500.

Odd News // 32 minutes ago
Soccer ball floats from Ireland to Wales, owner identified
April 16 (UPI) -- A Welsh family found a soccer ball washed up on the beach near their home and used Facebook to find the owner, who lost the ball in Ireland.