A bus in Sydney leans noticeably to one side. Screenshot: Dash Cam Owners Australia/Facebook video

SYDNEY, Feb. 24 (UPI) -- Footage of a lopsided bus in Sydney, Australia, is going viral online with social media users blaming the unusual tilt on a heavy object -- "yo mama."

The video, posted to Facebook by Dash Cam Owners Australia, features a Sydney bus with its left side noticeably closer to the ground than the left side.

"Yo mama so fat she had to get her own bus," the video's caption reads.

Commenters theorized the tilt could be the result of too many passengers sitting on one side.

However, Brett Dean of Dean's Hydraulic & Transport Services said the problem seen in the footage is likely not due to anyone's mother, overweight or otherwise.

"It is definitely a problem with the suspension. It is not an uncommon problem, it is like getting a flat tire," he told 9News.com.au. "The driver would have been aware of what was going on but he wouldn't have been able to do anything about it."

Dean said there wasn't likely to be any danger from driving the bus in its damaged condition, but he recommended it should be seem by a mechanic as soon as possible. 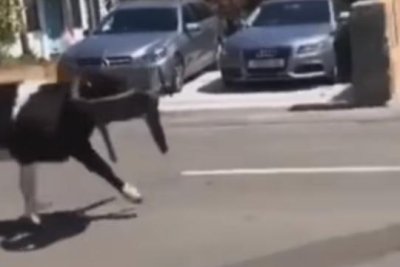