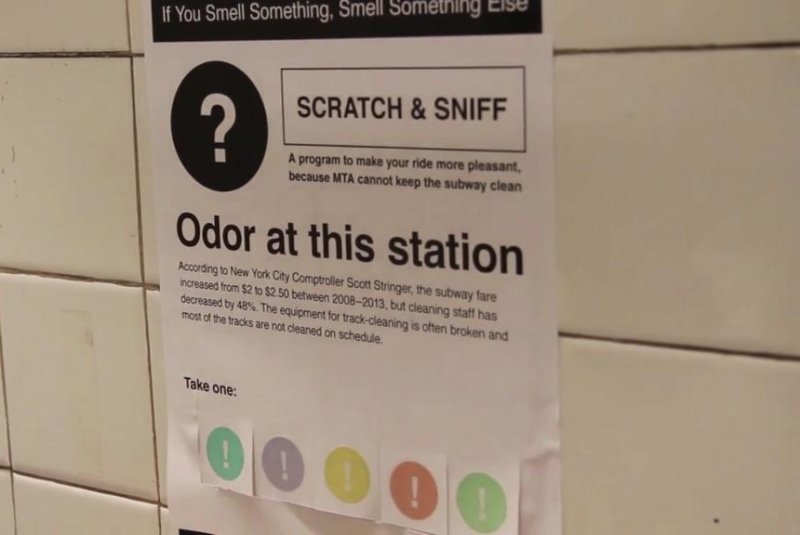 NEW YORK, Feb. 10 (UPI) -- A New York artist is seeking to improve the terrible scent of the city's subway stations with tear-able scratch and sniff cards.

Angela Kim, a School of Visual Arts student, said her "If you smell something, smell something else" campaign was born of a class assignment dealing with space and sensory.

Kim has been planting posters in the city's subway stations that feature tear-away tabs that each offer a scratch and sniff scent including sweet magnolia, vanilla, sweet orchid and orange blossom.

"A program to make your ride more pleasant, because MTA cannot keep the subway clean," the posters read.

The posters also offer an explanation for the foul odor of the city's stations: "According to New York City Comptroller Scott Stringer, the subway fare increased from $2 to $2.50 between 2008-2013, but cleaning staff has decreased by 48%. The equipment for track-cleaning is often broken and most of the tracks are not cleaned on schedule."

"New York is well known for its dirty subway stations. MTA raises subway fare every few years, but doesn't seem to provide better service," Kim wrote in the description of a Vimeo video explaining her project. "The idea was to post 'take one' flyers for straphangers to learn about the MTA problems by stimulating their sense of smell.