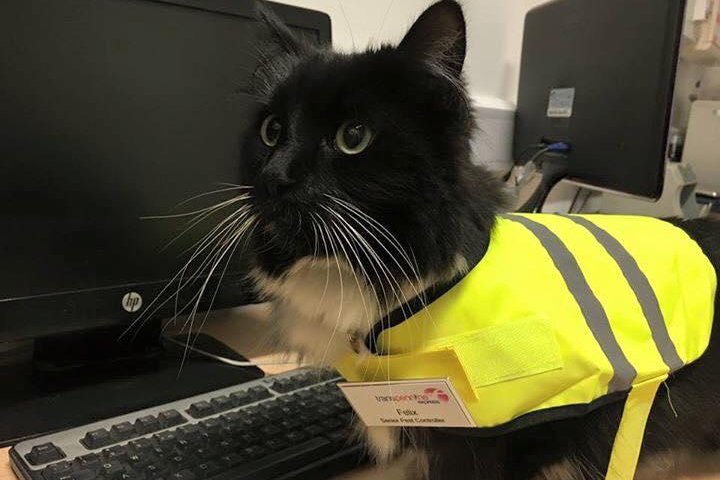 HUDDERSFIELD, England, Feb. 8 (UPI) -- A mouse-catching cat at a British train station was awarded a "promotion" to management, complete with a reflective vest and a name badge.

Felix, the cat brought to the Huddersfield train station about five years ago to catch mice at the age of only nine weeks old, was given a promotion to Senior Pest Controller this week from railway operator First Transpennine Express.

The promotion came with a reflective vest and a name badge.

A representative for Felix, whose Facebook page has brought her fans from around the world, wrote on the page that the promotion was in "recognition of what I've been doing for nearly five years."

My shift is about to start

Posted by Felix the Huddersfield Station Cat on Saturday, January 30, 2016

"A mouse a day keeps the boss away... My butler dresses me. A bit like Lord Grantham and his valet in Downton Abbey," a person writing as Felix said on the website.

Felix's privileges at the station include having her own cat door installed in the station's ticket barriers.

Posted by Felix the Huddersfield Station Cat on Sunday, July 5, 2015

"Well the fame hasn't quite gone to her head. As with most cats they already think the world revolves around them. She's getting more treats and more attention so all in all she's very happy," a station worker told Buzzfeed.

Bit of a rainy start to the week here in Huddersfield. 3 pigeons already chased off Platform 1 ready for the 0640 Airport service. Stay dry and warm everyone!

Posted by Felix the Huddersfield Station Cat on Sunday, February 7, 2016

Odd News // 23 hours ago
Colorado town pleads for return of stolen phone booth
Sept. 17 (UPI) -- Residents of a small Colorado town are pleading for the return of a phone booth that served as the centerpiece of a public park for decades.