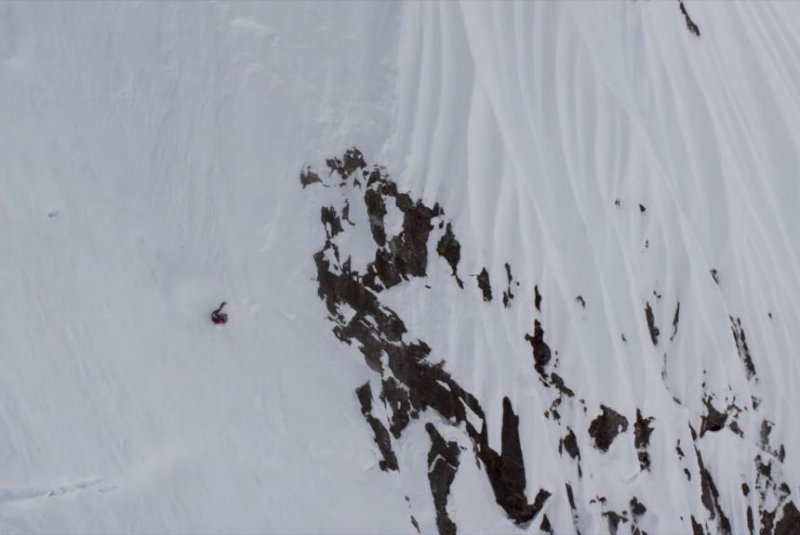 The footage, posted to YouTube by Teton Gravity Research as part of its "2016 Safety Week," shows Angel Collinson, 25, fall 1,000 feet while skiing on the mountain last spring during filming for a movie called Paradise Waits.

"I was skiing down pretty fast, but totally reasonable speed for what I normally do, and I hit some icy, chunky snow and it kind of bounced my ski around," Collinson told ABC News' Good Morning America. "This happens to us a lot but in this case it kind of bumped my ski up above me to my left and my body kept going down to my right and then that's when I started falling."

Collinson said she suffered minor injuries to two fingers during her fall.

"At first I was trying to slow myself down with my arms, but then once I started picking up speed I realized that I was going to be falling for a while and the snow was icy and there was big icy snowballs," she said. "As I was tumbling, I covered my face and protected my head with my arms and I kind of just held on until I stopped."

Fellow skier Ian McIntosh previously appeared in a video released by Teton of a similar fall on a Neacola Range slope. McIntosh, who was also filming for Paradise Waits at the time of his fall, said he was also able to evade serious injuries.

Odd News // 16 hours ago
Soccer ball floats from Ireland to Wales, owner identified
April 16 (UPI) -- A Welsh family found a soccer ball washed up on the beach near their home and used Facebook to find the owner, who lost the ball in Ireland.