NEW YORK, Jan. 25 (UPI) -- A New York snowboarder made the most of the weekend's winter storms by tethering himself to the back of a vehicle and taking to the city's streets.

Casey Neistat posted a video to Facebook showing him and some friends snowboarding and skiing the streets of New York during the weekend while being pulled through the snow-covered streets by an SUV.

The fun appeared as though it might be in danger at one point when the police showed up, but they were surprisingly supportive of Neistat and his friends.

"Someone complained about you, so we're just going to act like we're talking to you, alright?" a police officer says.

SNOWBOARDING WITH THE NYPD

Odd News // 22 minutes ago
Shark steals flipper from diver's foot off Australian coast
June 4 (UPI) -- An Australian diver spear fishing off the coast of Queensland captured video of his encounter with a bull shark that stole the flipper off his foot.

Odd News // 7 hours ago
Farmer grows record-breaking 7.1-foot coriander plant
June 4 (UPI) -- An Indian farmer was awarded a Guinness World Record after his coriander plant was confirmed to be the world's tallest at 7.1 feet. 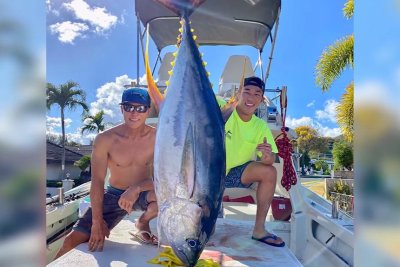