Eight-foot shark gets revenge on fisherman with face slap

This bronze whaler shark slapped a fisherman in the face. Newsflare video screenshot

LIPSON, Australia, Dec. 24 (UPI) -- An Australian fisherman reeled in an 8-foot bronze whaler shark from the beach, but the predator got his vengeance by slapping the man in the face.

Jack Jacobs, who posted video of his encounter to YouTube, said he reeled in the "bronzie" Tuesday at Rogers Beach in South Australia and the fish "put up an awesome fight."

The shark's fight didn't end when it was landed -- it used its tail to slap Jacobs in the face, knocking his head-mounted camera to the ground, while he was making sure it didn't still have a hook lodged in its mouth or body.

Jacobs said he measured the shark at more than 8 feet and released it back into the ocean after tagging it.

Odd News // 28 minutes ago
Hiker encounters loose emu in Colorado nature area
Sept. 28 (UPI) -- A visitor to a nature area in Colorado captured video of her unexpected encounter with a non-native animal: an emu.

Odd News // 48 minutes ago
Danish artist pockets museum's cash, declares it conceptual art
Sept. 28 (UPI) -- A Danish artist who was loaned $85,000 cash by a museum to use in a pair of artworks instead turned in two empty frames under the title, Take the Money and Run. 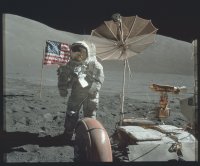