Hala the penguin plays with a toddler named Brynn at Ripley's Aquarium of the Smokies in Tennessee. Jukin Media video screenshot

GATLINBURG, Tenn., Sept. 16 (UPI) -- A young visitor to a Tennessee aquarium was recorded playing a game of "tag" with a speedily swimming penguin that seemed fascinated by its land-dwelling playmate.

The video, posted to YouTube by user Shelley Family, shows a toddler named Brynn running back and forth in front of the glass of the penguin exhibit while one of the flightless birds swims in pursuit at Ripley's Aquarium of the Smokies in Gatlinburg.

The uploader said the bird in the video was identified as a penguin named Hala.

The family said the penguin appeared to be playing a game of "tag" with the toddler.

Odd News // 35 minutes ago
Man bowls a perfect game with ball containing his father's ashes
April 21 (UPI) -- An Illinois man paid tribute to his deceased father by bowling a perfect 300 game using a ball that contained some of his dad's ashes. 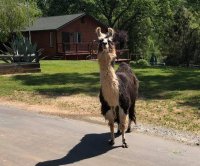 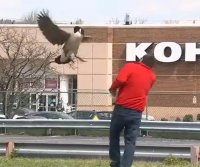