COLORADO SPRINGS, Sept. 15 (UPI) -- Police in Colorado Springs said a bear cub wandered into a pizzeria for a quick snack before settling in for a nap on a shelf.

Colorado Springs Police shared photos on Facebook of the bear being removed Monday from a shelf at Louie's Pizza by Colorado Parks & Wildlife officers assisted by police.

Police said Palmer High School was put into lockdown Monday when the bear was spotted nearby, hut the school was given the all-clear when the bear was found to have wandered through an open door into a Louie's Pizza food preparation room.

Investigators said the bear ate some cinna-bread icing before curling up for a nap on a shelf.

A Parks & Wildlife officer tranquilized the bear and took it to a rehabilitation facility, where it was found to be suffering from a wounded paw.

"If we get that weight up and the wound heals, it will go back into the wild," Robbins told the Colorado Springs Gazette. 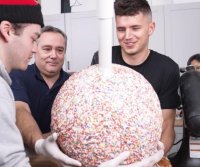 Odd News // 11 hours ago
TikTokers team up to make world's largest cake pop
Jan. 28 (UPI) -- A pair of popular TikTokers teamed up in Massachusetts to cook up a nearly 100-pound cake pop and break a Guinness World Record.

Odd News // 11 hours ago
Woman, dog rescued after falling through ice over frozen pond in Colorado
Jan. 28 (UPI) -- Emergency responders in Colorado said a dog ran out onto the ice of a frozen pond pursued by his owner, and both ended up being rescued from the frigid water.

Odd News // 12 hours ago
Teachers find wild fox sleeping on couch inside London school
Jan. 28 (UPI) -- Teachers at a London school arrived at the building to find a wild fox had made itself comfortable and was taking a nap on a staff room sofa.

Odd News // 12 hours ago
Rail car breaks away from Washington train, travels 16 miles down the tracks
Jan. 28 (UPI) -- Authorities in Washington said a rail car broke away from a train and rolled nearly 16 miles on its own before being stopped.

Odd News // 14 hours ago
Owners renovating old building in Washington find century-old mural
Jan. 28 (UPI) -- A couple living in a small Washington town said they were renovating the future home of their new business when they found 60-foot murals underneath the plaster covering the walls.