Manmeet Bhatia, 28, and Marc Kammerman, 41, were arrested and charged with armed robbery following the May 14 incident at the smoke shop in Millcreek.

The clerk at the smoke shop in Millcreek recorded narration for the May 14 armed robbery at the store and shared it with her sister, who posted it on Reddit. 801 801/YouTube video screenshot

MILLCREEK, Utah, May 20 (UPI) -- A Utah store clerk robbed at gunpoint said a viral video of her giving play-by-play of security camera footage was only supposed to be seen by her sister.

The woman, an employee at a smoke shop in Millcreek, said she recorded the sarcasm-filled commentary video of the May 14 video for her sister's eyes only, but the video went viral after her sister shared the YouTube link on Reddit.

"Here he is coming in the front door and here he is pointing [the gun] at me telling me to get down and I'm like, 'Uh, [expletive], what do I do?'" the woman says in the video.

The woman explains how she secretly pressed the emergency police call button and attempted to delay the robber by putting cigarettes in a bag one pack at a time.

The suspect left after about six minutes in the store and the woman later discovered police did not get her emergency call because the phone lines had been cut. However, she was able to write down the robber's license plate number and give it to police, who soon located the vehicle at a car wash.

The suspected robber, Manmeet Bhatia, 28, and his driver, Marc Kammerman, 41, were arrested on armed robbery charges.

"The cop says, 'You'll get your stuff back tomorrow,' and I'm like, that's amazing," she told KSTU-TV. "I can't believe how fast they caught him and we get our stuff back and it's just incredible because it's happened before and we've never been that lucky." 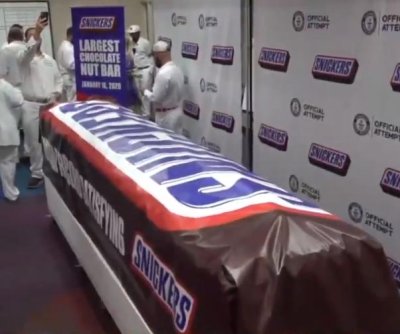