KNOXVILLE, Tenn., April 22 (UPI) -- A Tennessee father who used a drone to watch his 8-year-old daughter as she walked to school alone said he wants her to know "dad is always watching."

Chris Early, who owns a Knoxville video production company, said the camera drone he bought about a month ago came in handy when his 8-year-old daughter, Katie, insisted on walking to school by herself.

"She said 'you're not going to come watch me', but I had another idea," Early told WVLT-TV.

He said the drone turned plenty of heads upward when he used it to follow Katie on her walk.

"I could see other people looking up and I'm sure Katie was just like aw it's my dad," he said. "It was a way to keep eye on her make sure she was looking both ways. I let her know that dad is always watching."

Katie said she was not expecting the drone to follow her.

"I was like oh wow! He didn't tell me so I was pretty surprised," she said.

Odd News // 20 minutes ago
Singapore coffee shop workers find large python in toilet
May 17 (UPI) -- Workers at a coffee shop in Singapore received a scare when they went to investigate a noise in the bathroom and found a large snake slithering in a toilet.

Odd News // 1 hour ago
British Columbia boy doubles own world record for Jenga stacking
May 17 (UPI) -- A British Columbia boy with a gift for balance broke his own Guinness World Record by stacking 1,400 Jenga blocks on a single block -- more than doubling his previous record.

Odd News // 2 hours ago
60-year-old braids of hair donated to Michigan charity
May 17 (UPI) -- A Michigan woman who received some braids of hair from her aunt when she was 12 years old donated the 60-year-old locks to a charity that makes wigs for children. 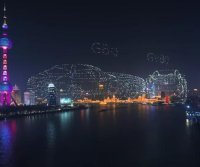