James Barber said he decided to help after seeing the negative comments made about Amanda Maxfield and her van on Facebook.

MUSKEGON, Mich., April 1 (UPI) -- A Michigan woman whose van with a missing driver-side door was made famous by viral photos said the door was fixed by a stranger for free.

Amanda Maxfield of Muskegon said her van was photographed and turned into a meme on Facebook while it was being driven by her friend, Devin Beeman, but the photo that went viral recently was only the latest in a series of pictures and videos taken by strangers during the past year.

Maxfield said the van's door was destroyed by a collision more than a year ago and it has been without a door ever since because her family couldn't afford to replace it and her fiancé was unable to repair it on his own.

She said the most recent viral photo led to a flood of negative comments and bullying online, but it was one comment in particular that caught her attention -- an offer of help.

James Barber said he wanted to counteract all the negativity with his offer to repair the van door.

"Of course, the public comments were insults and being mean, and I got on there an offered to help," Barber told WXMI-TV.

Barber fitted a replacement door to the van Saturday.

"I could not believe that somebody out of the kindness of their heart would help someone like that they don't even know," Maxfield said.

She said Barber has inspired her to commit her own acts of kindness. 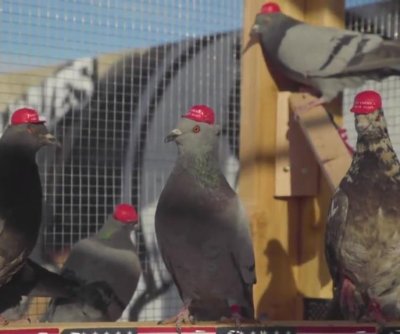 Odd News // 18 hours ago
Loose emu captured in South Carolina
Feb. 19 (UPI) -- Police in South Carolina said they chased down and captured an unusual loose animal -- an emu spotted wandering through a neighborhood.