"It was almost like the seal was bringing the octopus up the surface to show off what he had," photographer Bob Ianson said.

VICTORIA, British Columbia, Feb. 16 (UPI) -- A battle between a seal and an octopus in a British Columbia harbor was documented by an amateur photographer who snapped shots of the seal's victory.

Bob Ianson said a few dozen people gathered at Victoria's Ogden Point port facility Feb. 9 to watch the seal's struggle with the octopus, which was eventually overpowered by the mammal.

"That seal is probably, I don't know, four-and-a-half feet long? So that octopus is a pretty big octopus," Ianson told CTV News. "It was almost like the seal was bringing the octopus up the surface to show off what he had."

Chad Nordstrom, a research biologist at the Vancouver Aquarium, told CBC News the photos were rare, but the fight was not.

"Octopus is a regular part of the harbor seal's diet," Nordstrom said. "Actually capturing it on film is the rare thing."

Another witness, Thomas Anderson-Roffey, captured video footage of the struggle.

Odd News // 10 hours ago
Owner surrenders tiger spotted in Houston neighborhood
May 16 (UPI) -- The owner of a 9-month-old tiger seen loose in a Texas neighborhood last week has surrendered the animal to authorities, the Houston Police Department said Saturday night. 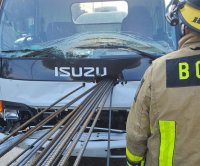 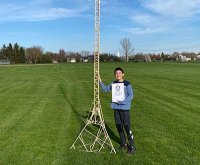