The General Motors Lansing Craft Centre in Lansing, Mich., is shown Nov. 22, 2005, the day after GM announced it was one of many plants that would be closed, and that the company would be eliminating 30,000 jobs. (UPI Photo/Scott R. Galvin) | License Photo

Sen. Harry Reid said Nov. 21, 2013, the Senate changed the filibuster rules because Americans "believe the Senate is broken -- and I believe they are right." (Reid is pictured June 3, 2014. ) UPI/Kevin Dietsch | License Photo

In 1974, the U.S. Congress passed the Freedom of Information Act over President Gerald Ford's veto.

In 1985, Jonathan Jay Pollard, a civilian U.S. Navy intelligence analyst and Jewish American, was arrested on charges of illegally passing classified U.S. security information about Arab nations to Israel. (Pollard, sentenced to life in prison, is eligible for parole in November 2015.)

In 2005, General Motors Corp., the world's biggest carmaker, announced it was cutting its payroll by 30,000 employees and would be shutting down all or parts of a dozen plants.

In 2006, Iraqi Prime Minister Nouri al-Maliki announced a restoration of diplomatic ties with Syria after 24 years of strained relations.

In 2010, Ireland asked its European partners for a financial rescue package of about $90 billion to bolster its sagging economy.

In 2011, the United States and Britain imposed new sanctions on Iran because of its suspected pursuit of nuclear weapons.

In 2013, the U.S. Senate made a historic rules change that weakened the power of the filibuster, which opposition parties have used to slow or derail presidential nominations. The change cut the number of votes needed for approval of executive and most judicial nominees from 60 votes to 51. Sen. Majority Leader Harry Reid, D-Nev., said the action was taken because Americans "believe the Senate is broken -- and I believe they are right."

A thought for the day: "I've never tried to block out the memories of the past, even though some are painful. I don't understand people who hide from their past. Everything you live through helps to make you the person you are now." -- Sophia Loren

Odd News // 13 minutes ago
Police officer rescues skunk with cup stuck over its head
Sept. 29 (UPI) -- A Massachusetts police department shared video of an officer coming to the rescue of a skunk with its head stuck inside a cup. 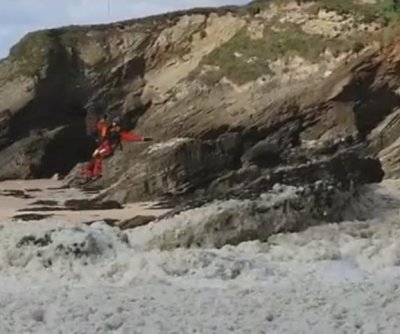 Odd News // 19 hours ago
Texas boy, 14, graduates from college with associate degree
Sept. 28 (UPI) -- A teen student is being celebrated by a Texas community college after obtaining his associate degree at only 14 years old.

Odd News // 23 hours ago
Watch: Bear with three legs steals Diet Coke from Florida garage
Sept. 28 (UPI) -- A Florida resident's home security camera captured footage of a bear that walked into an open garage and made off with a bottle of Diet Coke.