Statue of Liberty dedicated, A's and Giants notch World Series sweeps ... on this date in history. 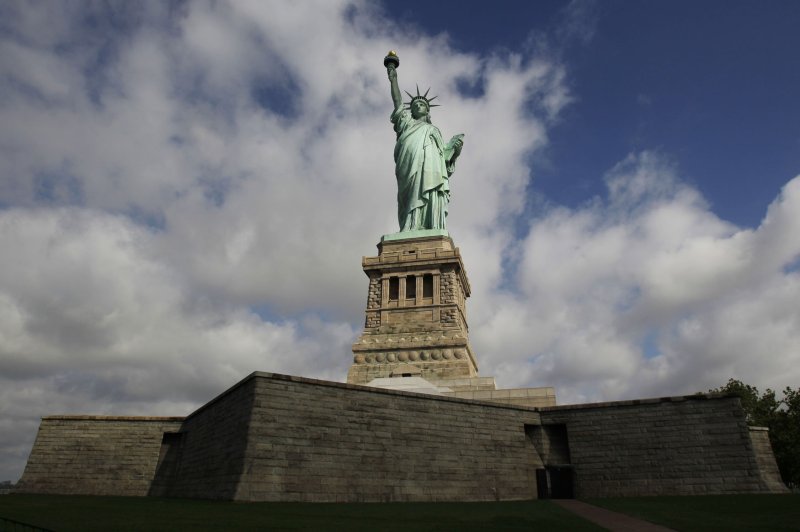 The San Francisco Giants' Ryan Theriot scores on Marco Scutaro's single for the go-ahead run in the 10th inning and the Giants held on to beat the Tigers in Detroit Oct. 28, 2012, and sweep the World Series. UPI/Kevin Dietsch | License Photo

The San Francisco Giants' Sergio Romo leaps in celebration after striking out the side in the 10th inning in Game 4 of the World Series Oct. 28, 2012, in Detroit. The Giants won the game 4-3 and swept the series 4-0. .UPI/Kevin Dietsch | License Photo

Bob Welch, a member of the Oakland A's 1989 World Series championship team, throws out the ceremonial first pitch in Game 2 of the American League Division Series between the A's and Detroit Tigers Oct. 5, 2013, in Oakland. The A's swept the San Francisco Giants 4-0 in the '89 series. UPI/Terry Schmitt | License Photo

Joaquin Phoenix of the cast of "Her" attends the movie's premiere in Los Angeles Dec. 12, 2013. UPI/Jim Ruymen | License Photo

In 1846, the pioneering Donner Party of 90 people set out from Springfield, Ill., on what became a tragic journey to California.

In 1985, the leader of the so-called Walker family spy ring, John A. Walker Jr., pleaded guilty to giving U.S. Navy secrets to the Soviet Union. (Walker died in a federal prison in August 2014.)

In 2007, Cristina Fernandez became the first woman to be elected president of Argentina.

In 2010, China announced it had built what experts said was the world's fastest supercomputer, capable of a sustained performance 40 percent greater than the previous record holder built in Oak Ridge, Tenn.

In 2012, the San Francisco Giants defeated the Detroit Tigers 4-3 in 10 innings to sweep the World Series.

In 2013, Conrad Murray, the cardiologist convicted of involuntary manslaughter in pop star Michael Jackson's death, was released from the Los Angeles County jail after serving two years of a four-year sentence

A thought for the day: "Gay people have a different role than other minority groups. ... Very few black kids have ever had to worry about telling their parents that they were black." -- Barney Frank