Pennsylvania 14-year-old charged with desecration of a venerated object for posting Facebook pictures of a simulated sex act with a Jesus statue. 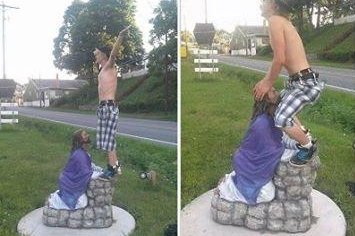 EVERETT, Pa., Sept. 11 (UPI) -- A Pennsylvania teen who posted pictures of himself with a Jesus statue was charged with desecration of a venerated object.

The 14-year-old was charged Tuesday under a rarely-enforced 1972 law making it a misdemeanor to defile a "venerated object" after pictures posted online depicted him apparently mimicking a sex act with a Jesus statue near his home in Everett.

The pictures were posted in July, but the misdemeanor charges were not filed until this week.

The boy's pictures were reportedly met with threats of violence online.

Odd News // 3 hours ago
South Carolina woman wins $50,000 lottery prize on her birthday
Aug. 3 (UPI) -- A South Carolina woman ended up having an extra happy birthday when a scratch-off lottery ticket she bought on her special day earned her a $50,000 prize.

Odd News // 6 hours ago
Woman reunited with class ring lost 29 years earlier
Aug. 3 (UPI) -- A Virginia man on a quest to find the owner of a high school class ring he found among his items destined for auction was able to reunite the ring with the woman who lost it nearly 30 years earlier.

Odd News // 7 hours ago
Emu on the loose in Ohio county
Aug. 3 (UPI) -- An Ohio animal shelter is warning area residents to be on the lookout for a loose emu seen wandering near a busy road.