Courtney Spruill was working at Kernan Middle School as a soccer team coach and PE/Health teacher.

JACKSONVILLE, Fla., July 9 (UPI) -- A Florida middle school teacher who is accused of twerking and receiving a lap dance from a student at a soccer team party has been suspended.

Courtney Spruill, who teaches physical education and health at Kernan Middle School, was suspended by the Duval County School Board. Spruill also coaches soccer at the school.

During the alleged incident, Spruill was seen drinking alcohol and twerking on players.

Cellphone video of Spruill getting a lap dance from a student at the party was also turned over to the district, Action News reported.

The homeowner of the house where the party was being held said that although Spruill did bring vodka to the house as a present, she didn't drink any of it and had soda instead. The parent also said she wouldn't allow the children to have alcohol. 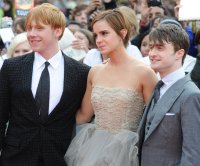 Odd News // 5 hours ago
Mystery animal that might be a dog escapes from Pennsylvania rescue
Jan. 27 (UPI) -- A mystery animal that experts said could be either a dog or a coyote escaped from a wildlife group's facility about a week after being rescued from the cold.