A baseball-loving bear stopped by an American Legion baseball game in Juneau, Alaska, on Sunday.

Local Larry Johansen was filming the 5th inning of a game between West Post 1 and Juneau Post 25 when players spotted a large black bear walking along the outside of the fence.

A caption to the YouTube video notes that officials halted the game until they "were sure what the bear's intentions were."

Luckily, the furry baseball fan passed by the field without incident.

Odd News // 50 minutes ago
$46,000 cash found under floorboards of Massachusetts home
April 22 (UPI) -- A Massachusetts family hired a professional treasure hunter to investigate decades-old rumors of money hidden in their home -- and he found $46,000 under the floorboards.

Odd News // 22 hours ago
Jogger followed by black bear in Wyoming park
April 21 (UPI) -- A jogger in Wyoming's Grand Teton National Park captured video when he caught the attention of a bear that followed him down the trail. 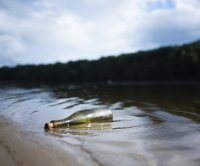 Odd News // 23 hours ago
Firefighters rescue dog alone inside moving vehicle
April 21 (UPI) -- Firefighters in Canada came to the rescue of a dog who knocked their owner's vehicle out of park and took an accidental joyride.

Odd News // 1 day ago
Man bowls a perfect game with ball containing his father's ashes
April 21 (UPI) -- An Illinois man paid tribute to his deceased father by bowling a perfect 300 game using a ball that contained some of his dad's ashes.