The Rangers were also able to turn the warning into a joke about LeBron James and the Miami Heat.

ARLINGTON, Texas, June 13 (UPI) -- Ballpark safety is certainly an important issue in Major League Baseball, but the Texas Rangers might be taking things just a little too far; they also might be trying to be funny.

During a recent game against the Miami Marlins at Globe Life Park in Arlington, the Rangers cautioned their fans against doing the wave to avoid getting injured.

The team used a bobblehead doll with a black eye to deliver the message:

The team was also able to incorporate a not-so-subtle jab at LeBron James and the Miami Heat with another public message about the wave.

Chuck Morgan, the executive vice president of ballpark entertainment and productions for the team, came up with the idea for wave warnings.

"We've done this for four or five years," Morgan told ESPN. "I get hundreds of tweets from fans to stop the wave. I'm a guy that says that anyone can come to the ballpark and do whatever he wants, as long as he doesn't offend anyone around him. But there's some feedback I've gotten from players that there are better times to do it. You can't stop it, but we can have some fun with it."

The Rangers split the two-game series with the Marlins.

Odd News // 22 minutes ago
Paraglider's lost sunglasses land in her lap in midair
April 22 (UPI) -- A woman going tandem skydiving over Turkey lost her sunglasses when they flew off her face -- and was reunited with them moments later when they landed on her lap. 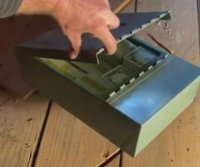 Odd News // 1 hour ago
$46,000 cash found under floorboards of Massachusetts home
April 22 (UPI) -- A Massachusetts family hired a professional treasure hunter to investigate decades-old rumors of money hidden in their home -- and he found $46,000 under the floorboards.

Odd News // 23 hours ago
Jogger followed by black bear in Wyoming park
April 21 (UPI) -- A jogger in Wyoming's Grand Teton National Park captured video when he caught the attention of a bear that followed him down the trail.

Odd News // 1 day ago
Firefighters rescue dog alone inside moving vehicle
April 21 (UPI) -- Firefighters in Canada came to the rescue of a dog who knocked their owner's vehicle out of park and took an accidental joyride.