High Court judge tells father to cut it out because it looks like he is shouting.

LONDON, April 17 (UPI) -- A High Court judge in England told an “insensitive” father that he must stop emailing his children in all capital letters because it looks like he is yelling at them.

The Israeli father is in a custody dispute involving his 13-year-old son and 9-year-old daughter. During the dispute, the children have been moving back and forth between England and Israel.

The judge ordered that the father’s old style of emails, which were "equivalent to him shouting,” needed to be improved upon with the help of a family assistance officer.

"He needs help to make his messages appropriate and child friendly,” the judge said. "There's nothing worse than an email suggestive that the sender is shouting at you."

Due to the communications problems, the relationship between the children and their father will be restored "at a distance."

The parents of the children also need to work on their communications skills.

"It is all about respect and a willingness to start again in the process of trying to interact as parents in a way which will enhance rather than harm their children,” the judge said. "I wish them every success in that endeavor."

Odd News // 18 hours ago
Woman dodging suspected scam calls finds out she won $1.47M lottery prize
Aug. 2 (UPI) -- An Australian woman who dodged multiple calls from what she suspected to be scammers was shocked when she finally answered the phone and learned she had won a nearly $1.5 million lottery jackpot. 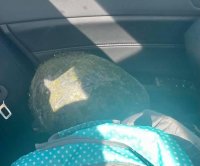 Odd News // 20 hours ago
Airborne turtle survives crash through windshield on Florida highway
Aug. 2 (UPI) -- Emergency responders in Florida said they were summoned to an unusual scene where an airborne turtle crashed through a driver's windshield -- and survived.

Odd News // 22 hours ago
Man balances 19 glasses on a stick in his mouth, breaks Guinness record
Aug. 2 (UPI) -- An Idaho man broke a Guinness World Record -- and a lot of glass -- when he balanced 19 drinking glasses on a wooden stick held in his mouth.

Odd News // 23 hours ago
Snake found left behind on British Columbia bus
Aug. 2 (UPI) -- The operator of a private bus service in British Columbia is trying to find the owner of an unusual piece of left-behind property: a pet snake.