OLATHE, Kan., Jan. 28 (UPI) -- A Kansas man was examined by paramedics after he ran back into a burning house to save an XBox gaming console from the flames, firefighters said.

Authorities said the man inhaled a lot of smoke when he re-entered the home after the fire began around 3:30 a.m. Friday. There's no word on whether it was one of the newest XBox One home entertainment systems with Skype, live television, the Web and apps.

The man was OK but the house sustained about $80,000 in damage, the Olathe (Kan.) Edge reported.

"Fire and smoke damage was extensive through the one-story home," said a spokesman for the Olathe Fire Department. "Firefighters remind everyone to check their home's smoke alarms by pressing the test button; and, to get out and stay out if your home is on fire. No item is as precious or valuable as a life."

The fire was blamed on a faulty electrical junction box. 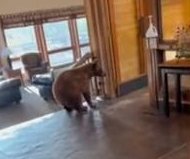