APELDOORN, Netherlands, Jan. 20 (UPI) -- Five rare monkeys were stolen from their habitat at a zoo in the Netherlands, police said.

A family of two adult and three young golden lion tamarins, miniature monkeys with a deep yellow/orange coat of fur, were stolen from their habitat at the zoo in Apeldoorn, Netherlands, DutchNews.nl reported Monday.

The animals were inside their portable night shelter, which the thieves removed after cutting a fence and kicking in the door to the primate enclosure.

It's the second time in a year miniature monkeys have been stolen from a zoo after a similar break-in at another nearby facility in 2013, police said. 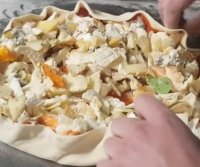 Odd News // 19 hours ago
Pizza with 254 kinds of cheese breaks Guinness record
Nov. 30 (UPI) -- A French chef captured a Guinness World Record by cooking up a pizza that contains 254 varieties of cheese.

Odd News // 20 hours ago
Dog reunited with family after 11 months on the loose in Chicago
Nov. 30 (UPI) -- A dog that ran away from her owner's home was reunited with the family after spending nearly a year on the streets of Chicago.

Odd News // 22 hours ago
Hawaii offers free round trips for remote workers
Nov. 30 (UPI) -- The State of Hawaii announced it is offering free round-trip tickets to Honolulu to people who work remotely and are willing to dedicate some of their time toward contributing to the community.

Odd News // 1 day ago
Unicyclist completes 450 juggling catches in 1 minute for new record
Nov. 30 (UPI) -- An Idaho man put his balancing skills to the test by breaking the Guinness World Record for fastest juggling while riding a unicycle.