Seattle woman ate only Starbucks in 2013

Beautiful Existence ate nothing but Starbucks for a whole year, and now her taste buds are "freaking out."

A Seattle woman whose legal name is Beautiful Existence ate breakfast, lunch and dinner from Starbucks during all 365 days of 2013.

The 40-year-old spent $500 to $600 a month on her food and reported on her blog what it was like to survive on only Starbucks.

As part of the year-long challenge, Existence only allowed herself to dine on food from the popular coffee shop or a "Starbucks-inspired" food source like Roy Street Coffee, Tazo Tea or Evolution Fresh.

"WHY? am I doing this challenge? Or WHY? will I do any challenge in the future? Because I LOVE being human and I LOVE the privilege of being able to ask the question WHY? in the first place!" she wrote.

The mother of two let her kids eat normally, but she never deviated from her Starbucks diet, even on special occasions like Thanksgiving or her birthday.

Even though she had a good amount of choices, Existence still got bored with her cuisine.

"In the last month, in the last couple weeks, it's been really difficult. People had pizza at the office last week and I was dying," she said. "I'm happy to be able to eat whatever I want (again)."

After finishing the challenge, the first thing that she ate was fish and chips.

"My taste buds have been freaking out for the last 24 hours," Existence said. "Starbucks doesn't really have anything that's fried, and you can only eat so much after you haven't had stuff like that for a year."

In 2014, Existence said she's going to learn 80 recreational sports as part of an REI-related challenge.

Odd News // 14 hours ago
Wandering monitor lizard ejected from hospital in Philippines
Aug. 7 (UPI) -- Medical staff members at a hospital in the Philippines found themselves dealing with an unusual non-medical emergency Friday morning -- a large lizard loose in the building. 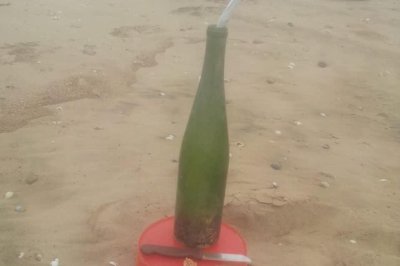