America's love affair with bacon reached a fever pitch in 2013, dominating the news with top stories in Health, Odd news, and Entertainment.

Chef John Johnson checks the status of the hoglog, the world's Largest hunk of bacon with a world record weight of 500 pounds cooked in a custom-built smoker at Baconfest in St. Louis on March 23, 2013. UPI/Bill Greenblatt | License Photo

Researchers at ETH Zurich have found that foods rich in niacin -- including bacon -- can help you live longer, therefore making it advantageous to eat foods that are rich in the vitamin.

Professor Michael Ristow and his team fed a group of roundworms a niacin-rich diet and found they lived one-tenth longer than their niacin-free peers -- a surprise, as scientists have long thought niacin promotes the formation of free radicals.

Men who eat bacon, may have less normal sperm

New research suggests eating bacon tends to lower sperm count. The data was presented at the American Society of Reproductive Medicine's 2013 Annual Meeting in Boston where researchers advised men to stay away from bacon and other forms of red meat if they are trying to conceive. “We found the effect of processed meat intake lowered quality and fish raised quality,” said Dr. Myriam Afeiche from the Harvard School of Public Health (HSPH).

The school made an announcement the Tuesday before the game, and K-State officials were only planning to cook up about 75 pounds of pork. After there was a full-scale bacon blitz on social media, they upped the amount on frying up 300 pounds of thick-sliced bacon, served in “bacon boats,” the containers usually used for nachos.

A Seattle company responsible for baconnaise, Bacon soda and Sriracha popcorn has a new product in time for the holiday season: bacon-scented deodorant.

Power Bacon sells for $9.99 per stick, and comes with a tongue-in-cheek warning that it is not to be consumed. "Do not eat, leave exposed to sunlight or explore the wilderness without a firearm," the company says on its website, www.PowerBacon.com.

Massachusetts man gets four months in jail for bacon attack

A Massachusetts man who attacked his mother when she berated him for eating too much bacon was sentenced to four months in jail.

Christopher Rougeau, 19, of Pittsfield pleaded guilty Tuesday in Central Berkshire District Court to misdemeanor assault and battery, and felony witness intimidation after police said he grabbed his mother by the throat last December, knocked her on the ground and disabled her phone when she attempted to call for help.

The executive chef for the Texas Motor Speedway said the menu now includes the Shake'n Bacon Brew, a beer milkshake infused with bacon.

Before the weekend was over, there was even more bacon: Mrs. Downey was treated to a round of "Happy Birthday" and a cake made with maple bacon, chocolate bacon, bacon bits, bacon jam and vanilla cake.

About a month after she turned 105, Pearl Cantrell told local news station KRBC how much she loves bacon, and Oscar Mayer sent the iconic Wienermobile to take her for a ride around Richland Springs, Texas. "I love bacon. I could eat it for every meal, and I do!" she said and encouraged others to do the same. "I want other people to eat bacon, I tell them too. My kids all eat it," Cantrell said.

J&D's Foods released an SPF 30 sunscreen designed to keep the wearer "smelling like something delicious is cooking for several hours.” It also released condoms that look like bacon and are coated with bacon-flavored personal lubricant.

U.S. fast-food giant Burger King, banking on an unusual taste combo to bolster its summertime revenues, announced in June the nationwide rollout of bacon sundaes. The decision was made to offer the pork-enhanced soft-serve dessert nationwide for a limited time after it "took Nashville by storm earlier this year."

Sosie Bacon, the daughter of Kevin Bacon and Kyra Sedgwick, was named Miss Golden Globe in 2013 by the Hollywood Foreign Press Association announced.

"I've been to the Golden Globes once before and it was such fun," Bacon said in a statement. "I was about 16 years old and I went with my mother the year she won. My parents have always had such a good relationship with the HFPA and the Golden Globes, so they are very supportive of me being Miss Golden Globe." 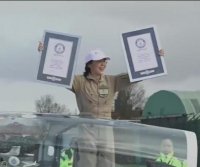