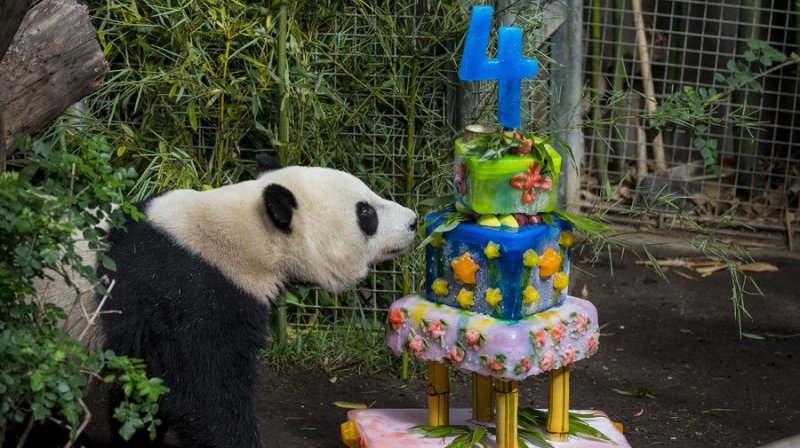 Giant panda Yun Zi inspects his birthday cake at the San Diego Zoo., August 5, 2013 in San Diego. The panda turned four years old today and received an elaborate four-foot-tall ice cake, topped with a big ice '4' and filled with some of his favorite treats Ð apples and yams. The San Diego Zoo is home to four giant pandas. The two oldest, Bai Yun and Gao Gao, are the parents of four-year-old Yun Zi and one-year-old, Xiao Liwu. Giant pandas are on a research loan to the San Diego Zoo from the PeopleÕs Republic of China. UPI/Ken Bohn/San Diego Zoo | License Photo

The zoo said it treated the birthday boy Monday to a 150-pound cake made of ice, apples, carrots and bamboo with honey and yam frosting on the top. Yun Zi pushed over a number atop the cake to symbolize blowing out the non-existent candles.

Yun Zi's enclosure was decorated Monday with gift boxes full of Bermuda grass and biscuits as well as a cardboard panda and turtle.

Yun Zi's birthday came only one week after that of his baby brother, also a resident of the zoo.