In 1859, Frenchman Jean Francois Gravelet, known professionally as the Great Blondin, became the first daredevil to walk across Niagara Falls on a tightrope.

In 1870, Ada Kepley became the first woman to graduate from an accredited law school in the United States, Union College of Law in Chicago.

In 1905, the theory of relativity was introduced by Albert Einstein in "On the Electrodynamics of Moving Bodies."

In 1908, a spectacular explosion occurred over central Siberia, probably caused by a meteorite. The fireball could be seen hundreds of miles away.

In 1934, German leader Adolf Hitler ordered a bloody purge of his own political party. Hundreds of Nazis he feared might become political enemies were assassinated.

In 1950, U.S. troops were moved from Japan to help defend South Korea against the invading North Koreans.

In 1971, three Soviet Cosmonauts, crewmembers of the world's first space station, were killed when their spacecraft depressurized during re-entry.

In 1998, a casualty of the Vietnam War buried at the Tomb of the Unknowns in Arlington, Va., was identified as Air Force Lt. Michael Blassie of St. Louis.

In 2004, the Cassini spacecraft, in space on a U.S.-European mission, became the first device to orbit the planet Saturn.

In 2005, Israel declared the Gaza Strip a closed military zone. All Israelis, except for residents, service providers and reporters, were barred from entering.

In 2006, a U.S.-Canadian investigation grounded a group accused of using helicopters and planes to ferry drugs from British Columbia across the border. Agents reported arresting 46 people and seizing 4 tons of marijuana, 800 pounds of cocaine, aircraft and $1.5 million in cash.

In 2009, the U.S. military completed its withdrawal from Baghdad and other Iraqi cities and towns as planned. Nearly 130,000 American troops remained on duty at forward-operating bases.

Also in 2009, Yemenia Airways Flight IY626, which had taken off from Sanaa, Yemen, crashed into the Indian Ocean while trying to land at Moroni, the capital of Comoros, killing 152 of 153 people aboard. The lone survivor was a 14-year-old girl.

In 2011, the U.S. Senate unanimously confirmed Gen. David Petraeus as director of the CIA.

A thought for the day: Bertrand Russell said, "Boredom is a vital problem for the moralist since at least half the sins of mankind are caused by the fear of it."

Odd News // 5 hours ago
California monolith becomes the third to appear and disappear
Dec. 3 (UPI) -- A silver-colored metal monolith has been discovered in California, shortly after similar monoliths in Utah and Romania were discovered and subsequently removed. 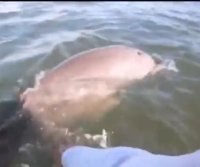 Odd News // 6 hours ago
Florida man on jet ski ride frees dolphin tangled in rope
Dec. 3 (UPI) -- A Florida man riding his jet ski in Biscayne Bay came to the rescue of a dolphin he spotted tangled in some rope attached to a cage.

Odd News // 8 hours ago
Escaped sheep wanders into hotel, waits for elevator
Dec. 3 (UPI) -- A hotel in Wales shared video of a sheep that wandered into the building and was found standing in a hallway where it appeared to be waiting for the elevator.