Defense attorney Don West began his opening statement this morning in the trial of George Zimmerman for the murder of 17-year-old Trayvon Martin in Florida.

Zimmerman was later charged with second degree murder by a special prosecutor.

West told jurors that Zimmerman is not guilty, and instead "shot Trayvon Martin in self-defense after being viciously attacked."

Then West told a knock-knock joke: George Zimmerman who? "Alright, good. You're on the jury."

The ill-concieved joke was a reference to lengthy difficulties during jury selection, due to potential jurors having already been influenced by intense media coverage of the homicide.

Earlier, prosecutor John Guy began his opening statement -- the first words of the day -- with a profanity quoted from Zimmerman's phone call to police reporting a suspicious person the night of the shooting: "F---ing punks. These a--holes always get away." 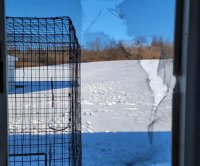 Odd News // 21 hours ago
Mystery animal that might be a dog escapes from Pennsylvania rescue
Jan. 27 (UPI) -- A mystery animal that experts said could be either a dog or a coyote escaped from a wildlife group's facility about a week after being rescued from the cold.

Odd News // 23 hours ago
Florida teacher has snowman mailed to class from Kentucky
Jan. 27 (UPI) -- A Florida teacher who discovered most of her students had never seen snow gave them an unusual surprise by having her sister mail the class a snowman.