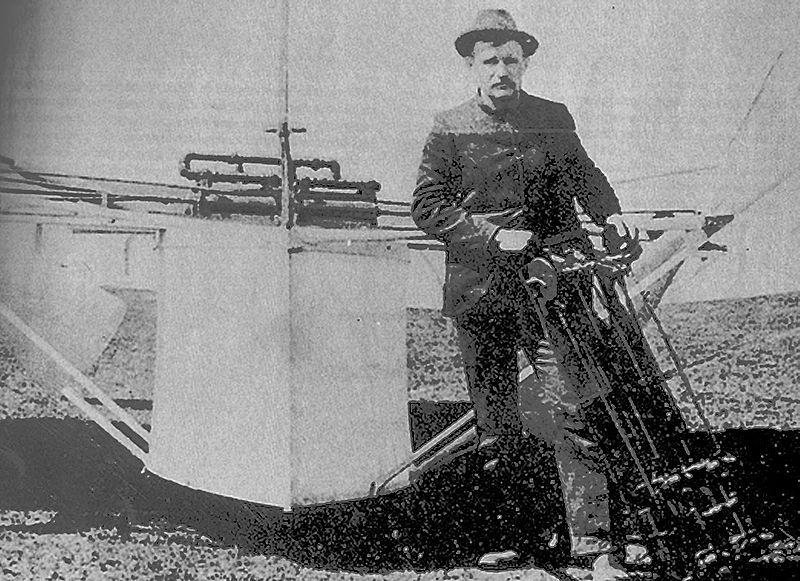 Gustave Whitehead holding a motor in front of his 1901 monoplane the Condor, or Number 21. (PD/US)

Line drawing which accompanied a full-page August 18, 1901, report in the Bridgeport Sunday Herald of claimed eyewitness account of Gustave Whitehead flying with power for a distance of "one half mile" on August 14, 1901. (PD-US)

The Connecticut state Senate recently passed a bill striking Orville and Wilbur Wright from history, and assigning credit for the first powered flight to Gustave Whitehead instead.

Aviation historian John Brown found photographic evidence in March that Whitehead made a powered flight over Connecticut in 1901, "two years, four months, and three days before the Wright brothers."

The relevant section of House Bill 6671 reads, "The Governor shall proclaim a date certain in each year as Powered Flight Day to honor the first powered flight by [the Wright brothers] Gustave Whitehead and to commemorate the Connecticut aviation and aerospace industry."

In 1968, Connecticut declared Whitehead the “Father of Flight,” recognizing his contributions before there was evidence of his powered flight. Governor Dannel Malloy is expected to sign the new bill next week.

Widely described as "first in flight," even on North Carolina license plates, the Wright brothers made their historic 852-foot, 59-second flight at Kitty Hawk, N.C. on Dec. 17, 1903.

Historians have long known that several individuals and groups were working on flying machines around the same time, including German immigrant Whitehead.

But some historians remain unconvinced that Whitehead ever got off the ground. Though there are surviving written accounts, the photographic evidence is compelling but not definitive.

Connecticut has a long aviation history, and Sikorsky Aircraft Corp., maker of the Black Hawk helicopter, has headquarters just miles from the site of Whitehead’s flight.

Whitehead's plane had bat-like canvas wings and was called "The Condor No. 21," and Brown said he flew it over Bridgeport, Conn. at a height of 50 feet for an estimated 1.5 miles on the morning of Aug. 14, 1901.

Odd News // 14 hours ago
Caiman Islands snorkeler follows squid to man's lost wedding ring
Sept. 24 (UPI) -- A woman snorkeling in the Cayman Islands said a squid led her to a wedding ring that she was later able to reunite with its owner.

Odd News // 15 hours ago
Ohio farmer's pumpkin breaks state record at 2,195 pounds
Sept. 24 (UPI) -- An Ohio pumpkin festival kicked off with a state record being broken by a giant pumpkin that weighed in at a staggering 2,195 pounds.

Odd News // 16 hours ago
Pet detective reunites Florida woman with dog missing for 59 days
Sept. 24 (UPI) -- A Florida woman was reunited with her Yorkshire terrier 59 days after the canine went missing thanks to a pet detective.