In 1868, at the end of a historic two-month trial, the U.S. Senate failed to convict President Andrew Johnson of impeachment charges levied against him by the House of Representatives. Johnson won acquittal by one vote on each count.

In 1897, "Dracula" was published by Irish writer Bram Stoker.

In 1940, the evacuation of Dunkirk began. Sailing vessels of every kind were pressed into service to ferry British, French and Belgian soldiers trapped by advancing German forces in northern France across the English Channel. All 200,000 were safely across by June 2.

In 1994, the United States and Vietnam resumed diplomatic relations.

Also in 1994, Michael Jackson and Lisa Marie Presley, the only child of Elvis Presley, were married in the Dominican Republic. They divorced two years later.

In 2003, a plane crash in Turkey killed all 74 aboard, including 62 Spanish soldiers returning from peacekeeping duties in Afghanistan.

In 2007, Iranian President Mahmoud Ahmadinejad said Iran was accelerating its nuclear program to become an exporter of nuclear fuel.

In 2008, the United Nations' International Atomic Energy Agency said in a report that Iran's suspected nuclear weapons research was a mystery, "a matter of serious concern."

In 2009, U.S. President Barack Obama nominated Sonia Sotomayor, a federal appeals judge, to the U.S. Supreme Court to succeed the retiring Justice David Souter. She was the first person of Hispanic ancestry nominated to the high court.

Also in 2009, the California Supreme Court upheld the ban on same-sex marriage, cementing results of an earlier public referendum. The 18,000 same-sex couples married before the ban, however, were still regarded as married.

In 2010, the shuttle Atlantis touched down at the Kennedy Space Center to end its final mission into space, 32nd flight over 25 years covering an estimated 120 million miles.

In 2011, Ratko Mladic, the former Bosnian Serb general accused of directing the 1995 massacre of more than 8,000 Muslims, was arrested in Serbia and extradited to The Hague to face charges of genocide and other crimes against humanity.

In 2012, Dmitry Medvedev, prime minister and ex-president, was elected leader of the ruling United Russia party.

A thought for the day: "All that glitters is not gold" comes from John Dryden but a similar saying appeared earlier in Shakespeare and earlier still in Chaucer. 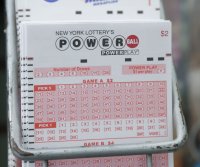 Odd News // 10 hours ago
Photographer unexpectedly captures proposal, finds couple on Twitter
June 24 (UPI) -- A photographer who happened upon a marriage proposal at a scenic San Francisco location was able to find the couple from the photos she snapped on social media.

Odd News // 10 hours ago
Teenager rescued from former bank vault at New York clothing store
June 24 (UPI) -- Firefighters broke through a wall in New York to rescue a 14-year-old girl who was trapped inside a clothing store dressing room that used to be a bank vault.

Odd News // 13 hours ago
Animal rescuer discovers 'king cobra' in garden was a plastic toy
June 24 (UPI) -- Police in Britain called animal rescuers for assistance capturing a "king cobra" in a resident's garden that turned out to be a plastic toy snake.