CHICAGO, April 16 (UPI) -- Authorities said they arrested a Chicago man who allegedly tried to sell a live baby alligator for $300 on Craigslist.

The Illinois Department of Natural Resources said an undercover officer responded to the ad posted by Juan DeJesus, 19, and went to the man's home Monday while posing as a potential buyer, the Chicago Tribune reported Tuesday.

DeJesus brought the alligator out of his home and was arrested on a misdemeanor possession of wildlife charge, police said.

The alligator was seized by the officer.

DeJesus is due to appear in court May 31.

Odd News // 9 hours ago
Horse runs through narrow gap between two Egyptian trains in viral video
Jan. 24 (UPI) -- A passenger on a train in India captured video of the moment a horse ran through the narrow gap between a moving train and a stationary train and survived the experience. 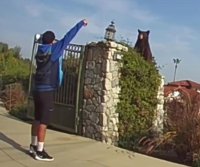