The moon is waxing. The morning stars are Mercury, Saturn and Neptune. The evening star is Jupiter.

In 1742, George Frideric Handel's "Messiah" made its world premiere.

In 1943, the Jefferson Memorial was dedicated in Washington, on the 200th anniversary of Thomas Jefferson's birth.

In 1964, Sidney Poitier became the first African-American to win an Oscar for best actor, honored for his work in "Lilies of the Field."

In 1970, an oxygen tank exploded aboard Apollo 13 while en route to a planned moon landing. The craft returned safety to Earth after some harrowing moments.

In 1972, the first major league baseball strike ended, eight days after it began.

In 1984, Christopher Wilder, the FBI's "most wanted man," accidentally killed himself as police moved in to arrest him in New Hampshire. Wilder was a suspect in the deaths, rapes and disappearances of 11 young women in eight states.

In 1987, the Population Reference Bureau reported that the world's population had exceeded 5 billion.

In 1990, Soviet leader Mikhail Gorbachev gave Lithuania a two-day ultimatum, threatening to cut off some supplies to the Baltic republic if it didn't rescind laws passed since a March 11 declaration of independence.

In 1992, construction workers breeched a retaining wall in the Chicago River, sending water flooding through a tunnel system connecting buildings in the downtown area.

In 1997, Tiger Woods, 21, won the Masters Tournament, the youngest golfer to accomplish that feat and first African-American to win any of the four major professional golf tournaments for men.

In 2005, as part of a deal to avoid the death penalty, Eric Rudolph pleaded guilty to four bombings that killed two people and injured more than 120. Among the attacks were bombings at the 1996 Olympics in Atlanta and two abortion clinics. Rudolph was sentenced to life in prison.

In 2007, U.S. regulators sought to determine whether a chemical was intentionally added in China to wheat gluten destined for pet food. Contaminated wheat gluten was in food reported linked to numerous deaths of dogs and cats in North America and prompted the recall of more than 90 brands of pet food.

In 2008, about 1,300 Iraqi police officers and soldiers were fired in Basra and Kut for failing to fight Shiite militias, the Iraqi government said. Some of those fired were said to have merely switched sides during the battle.

In 2009, music producer Phil Spector was found guilty of second-degree murder by a Los Angeles jury in his second trial for the 2003 slaying of Lana Clarkson, an actress and club hostess.

In 2011, Mexican officials announced they have a 12th suspect in recent kidnapping and massacre of passengers in buses traveling in Mexico.

A thought for the day: "We cannot hold a torch to light another's path without brightening our own." Ben Sweetland said that.

Odd News // 9 hours ago
Man on rafting trip rescues coyote pup from drowning
July 14 (UPI) -- A man on a multiday rafting trip in Saskatchewan rescued a drowning coyote pup and brought the animal along for the last 10 days of his trip.

Odd News // 10 hours ago
Honey leaking through walls alerts Pennsylvania couple to bee infestation
July 14 (UPI) -- A Pennsylvania family who found a mysterious sticky substance dripping from their walls discovered the thick liquid was honey and their walls were full of bees.

Odd News // 10 hours ago
Doctors remove live worm from woman's tonsil
July 14 (UPI) -- A team of Japanese doctors shared details of the case of a woman suffering throat irritation who was found to have a live worm inside her tonsil.

Odd News // 12 hours ago
Company seeks 'wine taster' to make over $300 drinking wine
July 14 (UPI) -- A British wine distributor is seeking a "wine taster" to get paid more than $300 to sample and review "some of the finest organic summer wines."

Odd News // 13 hours ago
Bear opens front door, goes into house to look for pizza
July 14 (UPI) -- Security cameras at a home in Ontario were recording when a black bear walked in through the front door and foraged for pizza. 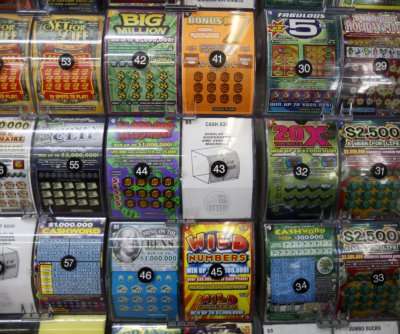