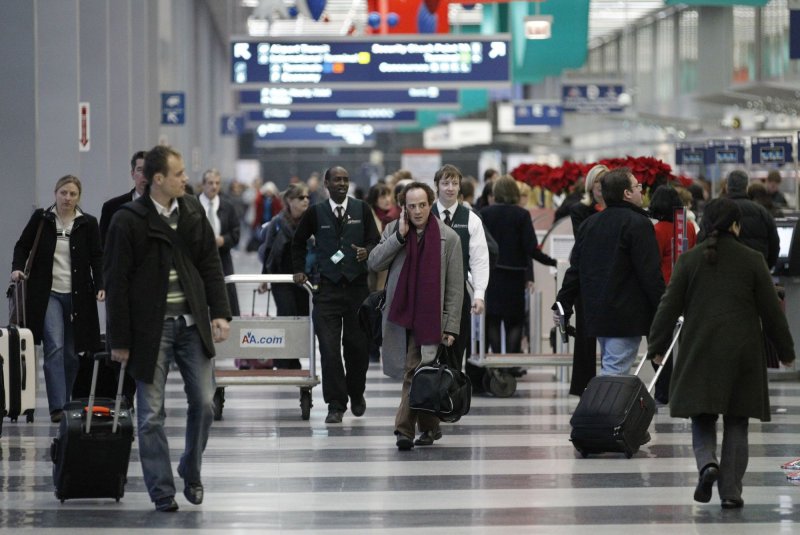 Travelers walk through O'Hare International Airport on November 24, 2010 in Chicago. The day before Thanksgiving is typically the one of the busiest travel days of the year, but passengers experienced few delays on Wednesday. UPI/Brian Kersey | License Photo

The O'Hare@50 exhibit, created by Northwestern University's Transportation Library to celebrate the 50th anniversary of the airport's dedication by President John F. Kennedy, includes the so-called "UFO video" among other documents, facts and other materials related to the airport.

The 2006 video involves a pilot flying at 38,000 feet having a conversation with the control tower. The pilot reports seeing an object at his "10 o'clock" that rapidly changes colors before vanishing. The air controller reports seeing nothing unusual.

Roberto Sarmiento, head of the Transportation Library and curator of the online exhibit, said the site also pays tribute to Ralph Burke, who wrote the original 1948 master plan for O'Hare.

"Burke deserves much of the credit for forging an innovative plan that, eventually and for the most part, became a reality," Sarmiento said.

The exhibit can be viewed at library.northwestern.edu/libraries-collections/evanston-campus/transportation-library/collection/ohare50.

"It's a mix of interesting and eclectic material that may better acquaint transportation enthusiasts and the general public with the history and lore of one of the world's most well-known airports," Sarmiento said.