BRADENTON, Fla., Feb. 4 (UPI) -- A Florida man who picked up a portion of a beer case because it was fish-shaped said he flipped it over and saw the image of Jesus.

Fred Truluck of Bradenton said he picked up the piece of cardboard from a Corona beer case while walking with his dog because of the religious symbolism of the fish, WWSB-TV, Sarasota, reported Monday.

Truluck, who described himself as a devout Christian, said the religious symbolism became even more apparent when he took the cardboard fish home and flipped it over.

Truluck said he plans to frame the image and one day pass it down to his children.

Joe Davis, pastor at the Church of the Palms in Sarasota, said he is skeptical of the piece of cardboard's connection to the divine.

"I don't think God goes and draws his face on a carton of beer," he said. "If you are one of us that believes in the God of the Bible, the scripture teaches more is that God would rather show his image through the works and love of his people than interact in the world."

Odd News // 4 hours ago
Large lizard escapes from Ontario zoo
June 21 (UPI) -- An Ontario zoo is asking members of the public to be on the lookout after a large lizard slipped out of the facility through an open door. 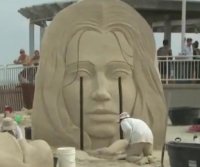 Odd News // 5 hours ago
8-foot python captured in driveway of New York home
June 21 (UPI) -- Police responded to a Long Island, N.Y., home at which a more than 8-foot snake was found slithering in the driveway.

Odd News // 7 hours ago
Hard hat lost in Massachusetts washes up on Portuguese island
June 21 (UPI) -- A Massachusetts man whose hard hat fell into the Atlantic Ocean in 2014 received word that his lost hat washed up 2,000 miles away in Portugal.

Odd News // 8 hours ago
Wild boar takes a ride on two Hong Kong subway trains
June 21 (UPI) -- A wild boar caused a stir on the Hong Kong subway when it took a ride on a train -- and switched trains at a station to evade its pursuers before being captured.