In 2007, six students were killed and four others hurt when a bomb went off at an Islamic school in Pakistan's Balochistan province.

In 2011, an Iranian military official said his army shot down an unmanned U.S drone after it entered the country's airspace from neighboring Afghanistan.

Also in 2011, international and local monitors branded the Russian Parliamentary election as fraudulent, citing alleged ballot box stuffing and other voting irregularities while throngs of voters staged massive protests against the election outcome. Vladimir Putin's party led the way with nearly 50 percent of the vote.

Odd News // 5 hours ago
Jogger followed by black bear in Wyoming park
April 21 (UPI) -- A jogger in Wyoming's Grand Teton National Park captured video when he caught the attention of a bear that followed him down the trail. 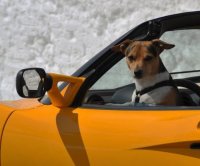 Odd News // 6 hours ago
Firefighters rescue dog alone inside moving vehicle
April 21 (UPI) -- Firefighters in Canada came to the rescue of a dog who knocked their owner's vehicle out of park and took an accidental joyride.

Odd News // 9 hours ago
Man bowls a perfect game with ball containing his father's ashes
April 21 (UPI) -- An Illinois man paid tribute to his deceased father by bowling a perfect 300 game using a ball that contained some of his dad's ashes.

Odd News // 9 hours ago
Barbary sheep escapes from Puerto Rico's largest zoo
April 21 (UPI) -- Residents of a Puerto Rican town said they are keeping their eye out for an aoudad -- a large wild sheep -- after the animal escaped from a local zoo.

Odd News // 9 hours ago
Dog rescued from SUV engine, adopted by firefighter
April 21 (UPI) -- A stray dog that climbed up into the engine compartment of a parked car in Dallas found a new home with the firefighter who rescued her.