Understatement of the Week: Tallahassee

Good-bye Wonder Bread -- the bread that "helps build strong bodies 12 ways," according to the advertising slogan for the brand of soft, white bread introduced in 1921 -- the 12 ways referring to 12 nutrients the owners of the company thought were worth talking about.

Hostess Brands, makers of these sweet, iconic goodies, said this week it did not have the financial resources to survive a strike by 5,000 members of the Bakery, Confectionery, Tobacco Workers and Grain Millers International Union and would, therefore, close its 33 plants and end the company that currently employs 18,500.

It is a company with a storied past, one sugary snack after another, some that date back to the Roaring '20s, like Ho Hos that first appeared in 1920 in San Francisco.

Hostess Cupcakes are a year older. They first appeared in 1919, the year Babe Ruth was sold to the New York Yankees and President Woodrow Wilson was in the White House.

Together, they define a kitchen of kitsch, a pantry full of Americana, a slice of our not-so nutritious national diet, but one that strikes at the hearts of youth, anyway.

Who can resist a Yodel? Certainly not cartoon character Homer Simpson. In one episode, with only the money to afford one, Simpson has to choose between a winning $500 lottery ticket and a Yodel. Guess which one he goes for.

Such a lineup of American history, the products made by Hostess Brands are like the cast of Marvel Comic super heroes. They seem to melt into a collective, universal consciousness. They are practically timeless, an American inheritance that should be passed on from generation to generation, like the rules of golf or Buster Keaton comedies.

Moreover, what's in a name? Ho Hos -- really? Twinkies -- we can say that in public? Yodels -- how perfect! These are names that beg for an appearance in a comedian's monologue. Imagine Robin Williams, Woody Allen and Johnny Carson touring a factory where Twinkies are made. Ripe fruit doesn't get much closer to the ground than that.

Hitched to the American scene, scriptwriters have long had fun with Hostess Brands. In "Ghost Busters," written by Harold Ramis and Dan Aykroyd, when asked what he means by the word "big," scientist Egon Spengler explains, "Well, let's say this Twinkie represents the normal amount of psychokinetic energy in the New York area. Based on this morning's reading, it would be a Twinkie 35 feet long, weighing approximately 600 pounds."

To which his cohort Winston Zeddemore replies, "That's a big Twinkie."

Comedic horror film screen writers must get together and compare notes, for several seem to recognize the power of the Twinkie metaphor.

Notably, for the Understatement of the Week, the Woody Harrelson character in "Zombieland" provides viewers with this apocalyptic prophesy which, unless a buyer shows up soon, could turn out to be the eulogy for Hostess Brands itself.

Written by scriptwriters Rhett Reese and Paul Wernick, the character named Tallahassee says, "There's a box of Twinkies in that grocery store. Not just any box of Twinkies, the last box of Twinkies that anyone will enjoy in the whole universe. Believe it or not, Twinkies have an expiration date. Some day very soon, life's little Twinkie gauge is gonna go ... empty." 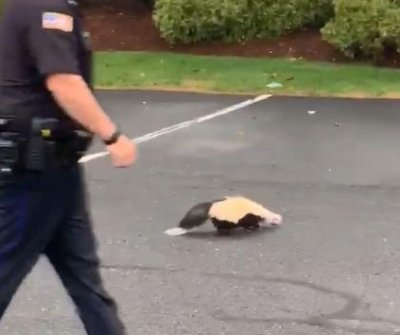 Odd News // 37 minutes ago
Police officer rescues skunk with cup stuck over its head
Sept. 29 (UPI) -- A Massachusetts police department shared video of an officer coming to the rescue of a skunk with its head stuck inside a cup. 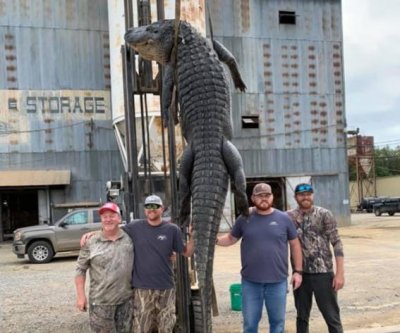 Odd News // 20 hours ago
Texas boy, 14, graduates from college with associate degree
Sept. 28 (UPI) -- A teen student is being celebrated by a Texas community college after obtaining his associate degree at only 14 years old.