In 1777, American soldiers won the first Battle of Saratoga in the Revolutionary War.

In 1881, U.S. President James Garfield died in Elberon, N.J., of gunshot wounds inflicted by a disgruntled office-seeker. Vice President Chester Arthur was sworn in as his successor.

In 1893, with the signing of the Electoral Bill by Gov. Lord Glasgow, New Zealand became the first country in the world to grant national voting rights to women.

In 1955, after a decade of rule, Argentine President Juan Domingo Peron was deposed in a military coup.

In 1985, an earthquake collapsed hundreds of buildings and killed 7,000 people in Mexico City.

In 1988, U.S. swimmer Greg Louganis took the gold medal in 3-meter springboard diving at the Seoul Olympics after hitting his head on the board during preliminary competition.

In 1991, the U.N. Security Council authorized Iraq to sell $1.6 billion in oil to buy food and essential supplies.

In 1994, the first 3,000 U.S. troops entered Port-au-Prince, Haiti, on a mission to ensure democracy, returned to the Caribbean nation.

In 1995, The Washington Post published the 35,000-word manifesto written by the Unabomber, who had said he wouldn't try to kill again if it was published. The Post and The New York Times shared the costs of publication.

In 2001, in the aftermath of the Sept. 11 terrorist attacks, the U.S. Defense Department ordered deployment of combat aircraft to the Persian Gulf, Indian Ocean, Uzbekistan and Tajikistan. The following day, the U.S. Army said ground troops were being sent to the region.

In 2004, Iran refused a plea by the International Atomic Energy Agency to end its enrichment of uranium, usually a first step toward producing fuel for nuclear reactors or bombs. Iran says it had only peaceful purposes in mind.

In 2005, in New Orleans, residents returning after Hurricane Katrina and the flood were told by Mayor Ray Nagin to stay away as Hurricane Rita headed toward the Texas-Louisiana coast.

Also in 2005, North Korea agreed in principle to abandon nuclear weapons and existing nuclear programs in exchange for oil and energy in a deal signed in Beijing. However, the deal fell through.

In 2006, Thailand Premier Thaksin Shinawatra was overthrown in a bloodless military coup.

Also in 2006, in an address before the U.N. General Assembly, the president of Sudan again refused to allow peacekeepers in Sudan's devastated Darfur region where 200,000 are reported to have died in civil strife.

In 2008, North Korea's Foreign Ministry said the country was restoring its nuclear reactor and wasn't concerned whether the United States lists it as a supporter of terrorism.

In 2010, the U.S. government declared the massive BP underwater oil well spill in the Gulf of Mexico to be considered officially closed and no longer a threat to its surroundings. The well exploded April 20, killing 11 workers and dumping an estimated 4.9 million barrels of crude into the gulf.

Also in 2010, a 42-year-old Frenchman with no arms or legs swam across the English Channel in 13 1/2 hours. Philippe Croizon, a quadruple amputee, covered the 21 miles with flippers attached to the stumps of his legs and special steering attachments in the arm areas.

In 2011, a 6.9-magnitude Himalayan earthquake killed dozens of people and injured more than 200 in northeastern India, Nepal and Tibet, authorities said. Relief workers in the entire region mounted a massive rescue effort despite rain, landslides and poor infrastructure facilities,

Also in 2011, violent crime in the United States declined 6 percent in 2010 from the previous year, the fourth consecutive year of decreases, the FBI reported.

A thought for the day: U.S. Army Gen. Omar Bradley said: "The world has achieved brilliance without conscience. Ours is a world of nuclear giants and ethical infants."

Odd News // 17 hours ago
Maryland man wins his second $2 million lottery prize
Oct. 27 (UPI) -- A Maryland man is celebrating his luck after collecting a $2 million jackpot from a scratch-off lottery ticket -- for the second time. 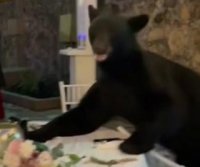 Odd News // 18 hours ago
Bear crashes wedding reception in Mexico
Oct. 27 (UPI) -- A wedding in Mexico became an even more memorable event for everyone present when the reception was interrupted by an unusual crasher: a bear in search of food.

Odd News // 21 hours ago
Iowa bar offers cocktails and karaoke -- but no alcohol
Oct. 27 (UPI) -- A new bar in Iowa offers cocktails, karaoke and pizza, but there is one common bar feature absent from the business: alcohol.

Odd News // 21 hours ago
Worker finds malfunctioning water well was full of snakes
Oct. 27 (UPI) -- A utility worker doing maintenance on a faulty water well in Iowa raised a pipe from the well and discovered it was covered in more than a half dozen snakes.

Odd News // 22 hours ago
Escaped cow leads Arizona police on late-night chase
Oct. 27 (UPI) -- Police in Arizona ended up in a late-night chase with an escaped cow that went running through a residential neighborhood.